October 9, 2015 -- Mao Den left for the Vastness today, his passing likely the result of pancreatic cancer. While Den's spirit soars, his Earthly body now rests in the garden just a few feet from the wall of his Dad's bedroom so that he will be close. It is with great sadness that DCIN bids farewell to a great kitty that we knew and helped to care for for more than three years. Enjoy the Bridge, dearest Den. 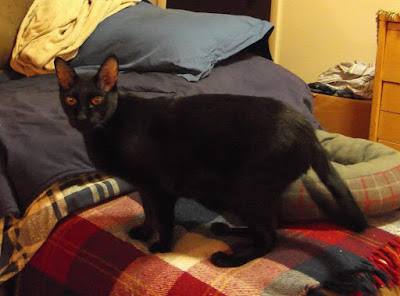 November 5, 2014--Two days ago, Den saw his local vet and then admitted to to an emergency facility for Diabetic ketoacidosis (DKA). Despite Den being in pretty bad shape upon admittance, the ER only kept him for 24 hours, treating him the standard of care for DKA. Thankfully, Den never stopped eating. He came home with pain meds and an anti-emetic. DCIN established a fundraiser for the $1700+ it spent at http://www.youcaring.com/nonprofits/den-is-in-dka/257247.

March 16, 2013--Den had his semi-annual bloodwork recently, this time a fructosamine. The results indicate no need for a change in his current treatment plan. His Dad says Den is feeling really good these days, very active and playful. ~V

August 22, 2012--Den went to the vet yesterday for a chem 10 bloodwork panel. And the results? All 10 values were in the normal range. George and DCIN are especially pleased that Den's liver values, which previously were significantly out of range, are back to normal. YEAH!!

We don't know yet whether Den will have to return for repeat bloodwork in 8 weeks (as was previously the plan), but we are still looking for donations for Den's care. (The donations to date didn't cover the cost of yesterday's bloodwork.) ~Venita

August 16, 2012--Den is a beautiful black boy who owns his Dad George. He was diagnosed diabetic in April and lost more than half of his body weight.

George can't hometest Den's blood glucose levels, and DCIN is working with him on alternatives. We want to get Den to the vet for some bloodwork. But we have that constant problem--money.

If you can, please donate a bit to help us with Den. He will be getting bloodwork soon, and again in 8 weeks.
Posted by Venita at 12:21 PM