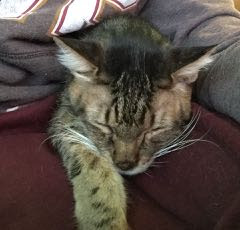 March 11, 2013--Dante has a new home. He will be flying soon, leaving sunny Florida for his new digs in the mid-Atlantic. If you can, please help DCIN pay for his flight, carrier, and health certificate. And please send the best wishes for a peaceful and loving life with his new family. ~Venita 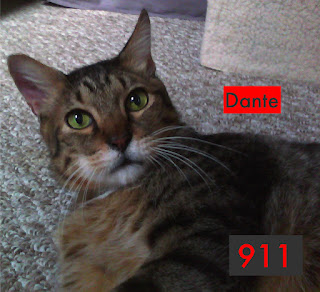 January 24, 2013--"I have put him back on the Prozac, because he was starting to get very upset about being cooped up all the time. I feel so bad for him. He really is a great cat, but they just won't get along (and it's not all his fault either). Anyways, yes, he still needs a new home. It's the right thing to do for him."

The new Mom didn't want to work with our animal behaviorist to bring accord to relations between the two cats. Isolating Dante was her preferred approach. Therefore, DCIN is making Dante a very high priority for rehoming. We agree that he needs a new home. NOW.

November 23, 2012--We have some new pictures of Dante. He is in central FL and looking for a new home.

November 11, 2012--Sadly, Dante is not working out in his new home. His Mom reports this based on his behavior with her other cat and her conversation yesterday with an animal communicator.

Dante and my other kitty are NOT a good match at all, mostly because of him. She wants someone to play with and snuggle with, but not him because he's a bully. He does not like her because he wants to be an only cat. He likes me alot, but not exclusively. He would like to be with anybody, just as long as he had a home- he would adjust nicely.

As a result, Dante is now confined to a bedroom. Dante's Mom continues--

As far as him being in "solitary confinement" here, he thinks he has won! He has his own territory and space, and the other cat is not allowed in. He is perfectly happy to not see her or interact with her in any way. He does not mind if he got sent to another home because of that. The animal communicator did tell them to try and get along, but he may not be willing to because it doesn't matter to him if he has to leave.

So, unfortunately, and for everyone's sake (people and pets) I think it would be best to see if we can find him a new home. He really is a sweet boy and deserves it. Oh, and he doesn't seem to have issues with my little weiner dog, but she doesn't really bother him either. She's 8yrs old and doesn't play too much, although he has wanted to play with her and in a nice manner.

Dante is showing some insulin resistance. He's up to 4U Levemir twice/day. The animal communicator said that he hasn't been feeling well for about two years (although it's hard for him to tell exactly how long because of the lack of discernible seasons in Florida). He also is on Methyl B-12 for neuropathy.

His owners moved away and left him, but always pretty much had people feeding him (and he loves his cat food that I give him).

His new Mom says that Dante has filled out nicely (don't get too tubby Dante) and his fur is now soft and shiny. He is a very people-friendly cat and purrs like crazy. DCIN has asked his new Mom to work with Beth, our animal behavior consultant, because we would like his Mom to try to socialize him to other cats. It's hard to find a home for an insulin-dependent diabetic without having to find a home for an "only." ~Venita

September 20, 2012--Dante has been home since Saturday and is settling in nicely. This is his Mom's report. She also tells me that she is keeping the name Dante. It is pronounced DAHN-tay. It is of Spanish, Italian and Latin origin, and means lasting and enduring.


He mostly hangs out in the bathroom, but hey, that's where he chose to be. Still have the gate up (I stack 2 when I'm not at home) and when he wants to, he jumps it.....guess he wants a change of scenery, lol. He's very quiet about it too. I'll turn around or look over, and there he'll be, just sitting there looking at me.

He's not as ravenous. I think he even put on a little weight already. He likes his boiled chic and a couple of temptation treats while I'm sticking him, so that's working out pretty good.

Oh- the gate I have is 2' tall....he can stand up on his hind legs and put his front paws on top and look over. He's a big boy; can't wait to get him all handsomed up!! He's starting to show some affection and even purring occasionally. 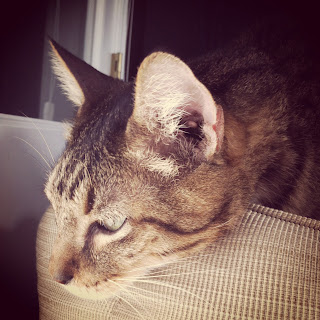 September 11, 2012--This weekend, Dante will be going to his furever home and heart. Just a few hours drive and he will be basking in the love of a new Mom and her kids. Mom says "I'm getting excited."

DCIN had Dante vetted last weekend. He's all shot up, has a microchip, and his bloodwork says he's A-OK. Well, there is that bit of diabetes, but that doesn't trouble DCIN friends.

He was rescued from the streets about a month ago and is currently living with the nice folks who nursed him to health. He loves people and loves having his belly rubbed. He is neutered and declawed, currently too thin at 10 pounds but with the help of his rescuers he's gaining weight back.

Rescuer states: "Dante is a great cat, he is loving and very affectionate, he is excellent around people. He will jump on our lap, sit & sleep next to us, (or in between my wife and I)." 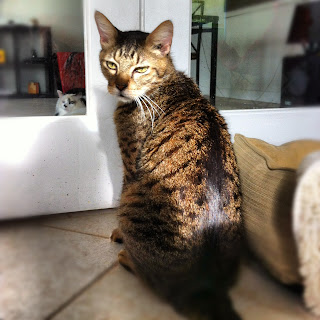 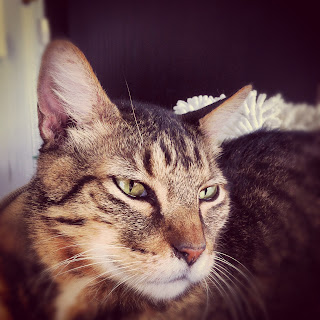 He is currently on ProZinc, 2 units BID and eating a script diet. Upon rescue he did have worms but that has been taken care of. His rescuers cannot keep him, they live in an apartment with a strict rule on number of pets, if it's found out he's there, they run the risk of losing their apartment.