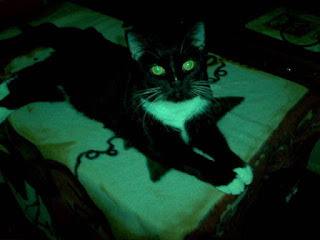 March 26, 2013--Bella Kitty's new Mom has moved very quickly to address Bella's acromegaly. Bella is now at Colorado State University receiving Stereotactic Radiation Therapy. She will be coming back home at the end of the week. ~Venita

March 8, 2013--Bella Kitty was tested for acromegaly and her like insulin growth factor is greater than 521, so she definitely has acromegaly. Bella has a wonderful new mom who will be giving her all the care she needs. 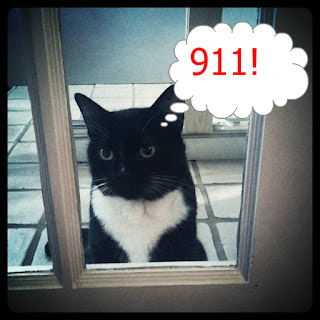 October 9, 2012~Update from BK's new mom "Bella Kitty is a very sweet kitty she purrs it seems all the time. I still have her in the room by herself until I get her regulated. I just started her on 4 units/2x/day---she has been ranging anywhere between 338 and 277. Her water consumption has gone down so the bowls aren't empty every morning. She is very east to give insulin to and cooperative with ear pricks to test her BG."

October 3, 2012--BK flew to CO. Everything went smoothly. Charbonneau's new Mom, picked her up at the airport and kept her for the night and met with her new mom the next day. BK's new mom wrote "Brought Bella Kitty home and she was greeted by my 3 legged dog Tiva and there was hissing; also hissing with my curious cats. She is in a room by herself with the baby gate and trying to keep the door closed and giving her time to adjust and settle in. Will wait until I see the vet tomorrow to have her BG checked and then start her on insulin.Thanks everyone."

September 27, 2012--BK went to the clinic this morning for her FIV/FeLV snap test and was negative. She also received her distemper vaccine. She will be going to the vet for her blood work and health certificate and then she will be ready to fly to her new home! Please Chip In to help her get there. JennF@dcin.info

August 18, 2012--From BK's mom "BK has her ups and downs. My husband said she was doing better shortly after I moved out (2 weeks ago) but now she's crying all the time and being finicky with her food. This has been the case for at least the past week. But as far as I know, she's not acting out at all (no peeing or defecating anywhere but her litter box)."

July 23, 2012--BK's mom and dad are separating and now she needs a new home. She is 7 years young, spayed, indoor only Tuxedo kitty. She was diagnosed with diabetes in April and is currently on 5.5units of Lantus. Her BG's are in the 200-300 range. She has already been switched to an all wet food diet and she has a big appetite. She is accustomed to home testing and is very good about it. She is not necessarily a "lap cat" but she will sleep at the end of the bed. She is shy around new people but warms up fast. There are no dogs or children in her home however she has been known to hiss at her owner's young nephews. She was living with one other cat until last year when that cat passed away from cancer. Her mom says she is willing to help with the cost of her care. She is just not able to care for her and the sooner she's adopted the better as her husband is not willing to care for BK for too much longer. If you are interested in saving this little girl contact JennF@dcin.info.

Posted by Jennifer F Alvarez at 12:31 AM