September 2, 2012--Sonny is Off the Juice! Sonny case has been particularly confusing because he would have large swings in this blood glucose levels for no apparent reason. Recently, less than half a unit of insulin could take him from over 400 to 54 mg/dl. Following veterinary advice, his folks are withholding insulin shots unless his BG level remains over 300 for an extended period. Without insulin, he now ranges between 120 and 170, and is feeling great. "He's a love bug and so easy to care for. Who knew it would only take canned Fancy Feast to "fix" him????"


We went to the vet today for a simple check-up and the vet was so happy with him! He said his coat has improved dramatically, his gum color was perfect, teeth looked great, and even though he hasn't gained an ounce, his muscle tone has started to come back in his back legs and he's filling out there again. His blood sugars still aren't where we want them, but the vet is fine with what they are right now. He's shown so much overall improvement.

Sonny likes to play a bit and he goes INSANE over bonito flakes which are his treat after his blood sugar testing. He has even climbed up on me and does his drooling and kneading on my neck!

Thank you for letting us adopt him. His diabetes hasn't really interrupted our lifestyle at all. It hasn't been hard to home test or give him his shots. He's such a sweetie and he's starting his way back in a big way!

June 17, 2012--For sugar cats, civies, droolers, and beans to sing the tune of Good Morning Starshine, from the musical Hair.


Good morning Sunshine
The road says hello
A family waits for you
There will be such joy!

Good morning Sunshine
We wish you the best
Our beans and us as we sing
Our early morning feeding song:

This morning, while kitties on the West Coast are still snoring, Sunshine will be heading North on I95 away from his lifelong, beloved home to meet a new family. He will have fur siblings and a furless child to play with. Welcome home, Sunshine. Live long and prosper!!

June 12, 2012:  Sunshine continues to lose weight.  Without getting insulin he is slowly starving. His furparents are truly unable to administer insulin, it's not a question of them not wanting to, physically they can't.  He's down to 10 pounds, 8 ounces.

June 4, 2012: Located in Maryland, outside of Baltimore, diagnosed this past winter, at about 11 years old, this handsome little man is in need of a home.  Four paw declawed, loving and gets along great with children.  He's been with dogs and other cats.  He's got one wrinkled ear, a possible hematoma at one time, but there's no pain and it's completely healed.

He loves to sit in laps and enjoys spending time in the sun on the enclosed porch.

His elderly human beans cannot afford treatment and must find him a new home. He is currently not receiving insulin and is FIV/FeLV negative. 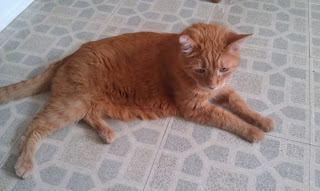 I would like to suggest that - if you get consent from the adopter - it would be SO nice to know who the wonderful people are who adopt these lucky cats. (Yeah, I know - I'm nebby, but sometimes I'd really like to send specific congratulations to these great folks.)

I hear you. We make those disclosures when we feel that is appropriate. Thank you for trusting us on the choices we make for the cats we help.

Thank you so much for the update!!!!! If he's kneading at your neck he is extremely happy. He used to do that to my mom all the time. We have all been curious about how he is doing. It sounds like he is doing wonderful. It is comforting to know that he is doing so well at his new home. We would love to continue to hear about his progress. Thank you again. Ginger