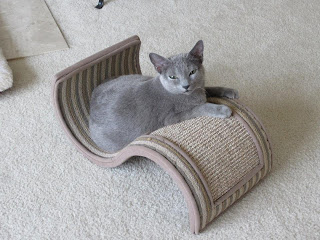 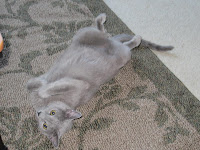 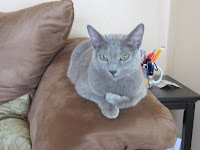 Click this Link to Donate for Dillon's ER Visit

March 15, 2013--Dillon spent some time at an emergency clinic last night; he was shivering and his eyes were watering. X-Rays looked perfect so the vet suspects the "shivering" to be a soft tissue injury from playing/running/jumping too much and the treatment plan was for pain meds and to watch him. The vet didn't think his eyes are anything to worry about yet because they aren't red, but it may be the start of an upper respiratory infection and to watch for that. ~Venita 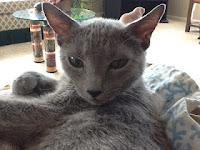 June 9, 2011--It is with pure joy that we announce that Dillon is on his way to his furever home with Jennifer H, the woman who recently adopted Buddy and who is fostering Miss Kitty for DCIN. A DCIN friend is driving Dillon from Chicago to Eastern VA. It was pure serendipity that this friend was driving from when Dillon was to where he is going on the very weekend we had planned to ship him. We just hope that she doesn't steal off with this precious cargo. Dillon can steal hearts, and we wouldn't put it past him to convince his driver to head to the Canadian border. But, wait, Dillon; there is a wonderful new family breathlessly awaiting your arrival. ~Venita~

May 31, 2012--We are upgrading Dillon rehoming need to Urgent. This sweet boy need to find his own home and heart. Contact Jennifer at JennF@dcin.info with questions or interest.

May 20, 2012:  Dillon is off insulin and is diet controlled. He enjoys sitting with his foster mom when she reads and is getting used to having other cats around. He would be a wonderful companion to anyone.

Dillon in in the Chicago area, and ready to rumble your way when you are ready for him!!

May 12, 2012:   Dillon has been moved to a foster home, but he can't stay.  The foster home is full and there's not enough room for him there.  The wonderful news is he's on three days without insulin.  He may be broken already!

He's loving foster care and in this video you can see for yourself what a wonderful loving companion he would be for anyone be.


His foster mom tells us the following:  Dillon is such a sweet lovable boy! Although he is shy upon first introduction to new people, places and pets, he adapts quickly. He is a very affectionate showering is person with headbutts, leg rubs, and rolling on the floor presenting tummy for rubs. BG testing was a challenge at first because Dillon kept trying to headbutt me. But he is a fast learner and now sits quietly for his pokies. Occasionally he will signal he's had enough by rolling his head on the floor to hide his ear. :) He loves to sit next to me at night while I read and last night came and sat on my lap for the first time. He is very attached to people and would prefer to have them all to himself but I think he would do well with one or two other cats and children with a gradual introduction. Dillon has briefly met the resident 5 cats here and found some of them them too big for his taste ... and prefers to hang out in his own room instead. To my knowledge he has not been exposed to dogs. Dillon is currently eating Fancy Feast Chunky Chicken and eats between 4-5 oz. per day. He is a small cat weighing only 9 pounds, 3 ounces, but he's at a good weight for his body size. He still has neuropathy in his hind legs and walks down on his hocks. But he is able to walk, run a little and jump about two feet onto a sofa or chair. He is getting daily 3mg methyl B12 pills. Dillon is a grazer and prefers to eat more at night than during the day. He is a solitary eater with me, preferring to not have an audience.
**************************************************************************************
May 3, 2012:  Dillon is a very handsome purebred Russian Blue who has been loved and doted on his entire life. It is with such sadness that DCIN works to try to find a new home for Dillon. His mom fell and she is now paralyzed from the neck down. Our thoughts are with her and her family as we try to find the perfect home for her beloved. 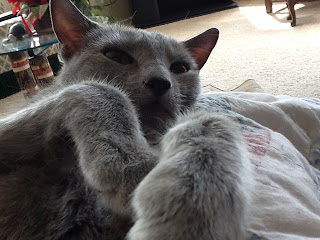 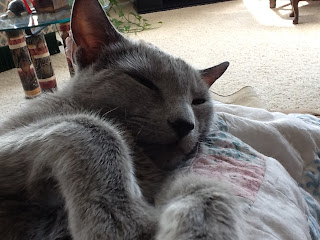 At just 10 years old, Dillon was diagnosed with diabetes in September 2011 and currently receives BCP PZI insulin. His diet is Hills Prescription Diet W/D Feline Low Fat Diuretic Gastrointestinal Food. Extra-sweet Dillon lives is in Northern IL. He previously has not lived with other cats but DCIN does have a behavior consultant Beth who can work with you and help with a slow integration if he were to be adopted by someone with other cats.
Posted by Jennifer at 8:40 PM

A location for this cat would be very helpful. I didn't see it mentioned anywhere in the article.

Dillon is in Northern IL. I will add this to the text of the post.

What a beautiful boy! I know his mom must miss him!

So happy to see Dillon so sweet and happy. I knew his mom and other family members in Illinois. He was very loved and cared for there. Also love the December 2012 photo of Dillon and his new friend Buddy. Thank you DCIN for all you do!

So happy to see Dillon so sweet and happy. I knew his mom and other family members in Illinois. He was very loved and cared for there. Also love the December 2012 photo of Dillon and his new friend Buddy. Thank you DCIN for all you do!