May 28, 2012:  Walter is no longer a 911, urgent or rehoming kitty.  His mom could not part with this handsome boy.  She will be travelling for a few months, but will take Walter with her.  She will also start hometesting and treating his diabetes more effectively.

Walter will even be staying at Spa Venita's for a week in late July when his mom is nearby but can't have him stay at the hotel during that time.

We are excited for Walter, he'll be a traveling man and he'll be doing in style with his mom.

May 20, 2012:  We have made Walter 911. His Mom is away from home for long periods, and an outdoor life is not a good life for a diabetic cat, even though he is staying with a kind and caring friend during Mom's absence. DCIN can help get him to an adoptive home anywhere in the continental US and the populated parts of Canada. If you are thinking of fostering, we would like him not to travel a long distance.

May 18, 2012: Walter is currently staying with a friend, but needs a permanent home. The little man recently got himself into a bit of trouble. He pulled out a claw, probably climbing a tree. He's bandaged up and we hope he's feeling better. See the photo of him in his cast. 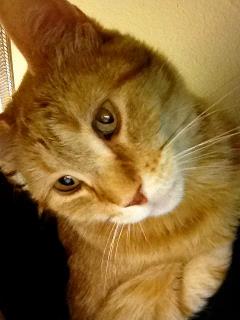 April 23, 2012: Sweet Walter is 8 years young and has been diabetic for the last two years. He's in need of a new home. He is a charmer, a wonderful kitty, big and playful. &In the video below you can see just how much of a gentleman he is.

His current person loves him very much but will have to travel quite often for work and will be gone for long periods of time. She can no longer care for him.
He is currently in California.

Do you think I trade hubby in and start my House of Gingers?

Amber, I don't think so. Our adoptable DH list is much longer than our adoptable diabetic cat list. And it's a First In-First Out list so it would be a long time till your DH gets to the top of the list. In fact, maybe forever, because the first DH on the list is still there waiting for an adoption.

He's a wonderful kitty and I've had diabetic cats before, including one who was very brittle. But I'm in South Florida. How would we get him here? I'm retired and on a fixed income. Lost my big golden boy last year and don't currently have any boy kitties. Really miss having baby boy cat energy in the house...

DH can be dear husband, damned husband, or whatever you want the "D" to be.

Pearl--Walter's case manager is Jennifer J. If you would like to talk with her about adopting Walter, please email her at Jennifer@dcin.info. With distances as there would be from CA to FL, we would fly Walter on Continental Cargo. We have a couple people dedicated to making sure those flights go as smoothly as possible.