May 15, 2013--We are deeply sad that Lisa lost her Baloo last night. He stopped eating over the weekend and developed DKA and lost all motility in his intestines. Fly free, Baloo. Although you were only home with Lisa for a bit over a year, it was a glorious year with a kitty friend and more love than you ever could have imagined. ~V

October 27, 2012--Oops. We failed to announce that on May 1 Baloo found a new home right in his home town. One of our friends from the FDMB found out about Baloo's need from an email that came from the vet's office to the shelter where she works. She contacted the family and adopted Baloo. Baloo is a big boy, insulin dependent, and gets along very well with his sister kitty, who was getting lonely without another cat in the house. 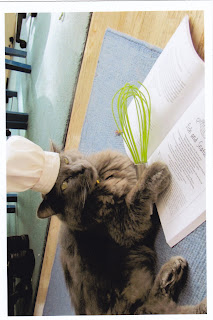 April 27, 2012: DCIN has received word that a cat is going to be brought to a vet to be put down, we have only a week or two at most to find a home. If we can get a photo we will post it. The information we have so far is as follows. 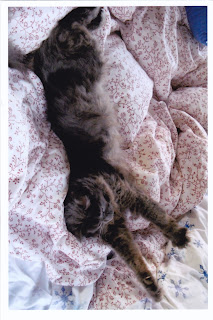 He is 10 years young, gray, medium hair. Sweet personality. The only other issue that they know he had was some constipation but he does well with Miralax. He is negative for FeLV and we are waiting on his FIV status. He's up to date on shots. The clinic thinks he is an only cat right now but will ask if he has lived with others before. He is not reactive to animals at the clinic and when they bring him in he is not in a carrier, he just sits in their arms, very mellow.

From the vet clinic: if someone adopts him, they will get insulin at cost and a glucometer at a very decent price. 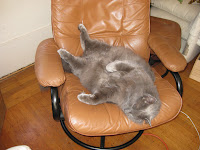 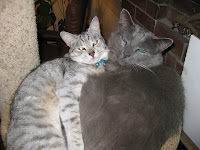 The clinic cannot board him, if they get a commitment for adoption or foster before the PTS date they will ask the owners to surrender the kitty, if not, they will PTS.
Posted by Jennifer at 12:37 PM