September 3, 2013--Happy one-year anniversary Norman/Willem. Willie is a DCIN foster cat that has been in my home for a year today. He had an adoptive home for three weeks but was becoming a prey cat and I was concerned for his physical safety. He had stayed at Spa Venita for a few days during his transport to his new home, so DH and I knew he was a good boy, and decided to bring him back here. What a tiring Labor Day that was, driving about 10 hours in torrential rain and very heavy traffic. It reminded me of another transport in hurricane-driven rain that was aborted because the state of DE declared a state of emergency and closed the roads.

In the year Willie has been here, DCIN hasn't once promoted him for adoption. He's such a good boy, never starting any trouble although he is sometimes in the thick of it. Willie and Casey...my tabbies...wrestle all the time. Casey likes Willy, I think, because Willie makes Casey look slim. They are well suited physically, but Willie is more rotund. What is it about tabby boys and that thick rear end thing?

Jackson terrorized Willie at first, as Jacks is prone to do with all kitties. Jacks has two speeds---0 mph and 100 mph, and he does strafing runs. But Willie has learned to listen for Jackson's heavy-footed approach and maneuver himself into a position or location where Jackson's not-so-stealth pouncing is difficult. Jacks often lets the much-less-agile Willie chase him, bringing his speed down so that Willie can keep up. My house has a kitchen-hallway-living room-dining room-kitchen circle. When they first started their chasing game, Jackson went so fast that he would be right behind Willie at about lap 1.75. Now, during their chases Jackson does not move like a bullet but more like he is jumping hurdles. That allows Willie to keep up.

My diva Nellie has a decided dislike for this slow, clumsy interloper. Nellie is a tiny thing, about 8 pounds and a flying cat, and she will corner the cowering 13 pound Willie in my bedroom (her throne room) and thump him about the neck and face just because she can. She knows Willie's dinner and bed times (he spends those times in his separate bedroom) and she will either hide under or lay defiantly on the bed and plot her terror plans. (Should we miss her presence there at bed time, and they spend the night together in Willie's room, Willie is a quivering mass the next morning.) Or Nellie will lay at the top of the stairs or in the doorway, and Willie is too fearful to go past her.

Aside from his well-established routines with the resident cats, Willie has his own routine. He comes out of his room about 7am every day and spends most of the day on a chair or floor pillow on the catio. He is one with nature, enthralled with the backyard squirrels and birds and the rain and wind. Jackson sometimes joins Willie there and they sit together on the table; their heads moving in tandem watching the critters outside their screen barrier. When I am working in the kitchen, Willie usually comes in from the catio to ask whether I am interested in giving him food. When he helps me make Jim's dinner, I call him Chef Willem. He comes into the house when Jim gets home in the afternoon and seeks out a favored napping spot. Jim's lap if Casey isn't there, the back of Jim's couch, or the ottoman in my bedroom, where he always lays on his back and splays his legs. He may even spend a few minutes laying on my chest when I am in the recliner, purring that a snack would be welcome.

Willie is a happy boy and loves it here (despite Nellie's terror). I have thought that there is a better home for him out there, but then I think of the upheaval he has been been through since DCIN has known him. Abandoned (unaltered) at a barn in NC and DXd diabetic there, fostering at a sanctuary-type rescue in VA and immediately OTJ, traveling an extended ground transport to a new home where two of the resident cats said "no new kittehs allowed," and now here for a year. I sometimes ask Jim about Willie's future and he doesn't doesn't commit to our adopting Willie but he also doesn't seem too happy with not having Sweet Willem here.

I think this is an auspicious day to tell Willie and the rest of the kitties that Willie is furever home. ~Venita


I really lucked out when I adopted Norman. The silliness and cuteness factor is off the charts. He loves to snuggle, or just hang out close to you. He truly embodies happiness and love. When I met him for the first time, it took me all of about 5 minutes to realize how special he is.

Sadly, two of my three cats did not take to him. While I've seen some hissing and pawing in the past introducing cats, I was now seeing full-on attacks on poor Norman. I tried my best to change this behavior, but nothing seemed to work. Norman was getting increasingly stressed, as were my other cats.

Venita and her husband Jim stepped in to offer to foster him, and to take the time to help Norman recover from this recent trauma. There couldn't have been a better option for him.

I will always hold Norman close to my heart, and I miss him so very much. Please send peace and acceptance vibes to Venita's cats so they accept this sweet boy, as he is so deserving of a loving and safe home.

August 17, 2012--Norman's new Mom came for him yesterday, and they left together today. I think Mom is smitten. Welcome home, Norman.

Norman is a very dear boy.

August 4, 2012--Next weekend, I will be in DC for the No-Kill Nation annual conference. While I am there, Norman's foster Mom will bring him to me and he will stay for a few days at Spa Venita before he finishes his trip north to his new home and heart. His adoptive Mom is very exciting to bring him home. We still have details to work out and will let you know about them. ~Venita


June 24, 3012--Norman is doing just fine. However, he did have a scrape with another cat and had to see the vet for a bite abscess. He is on Clavamox and takes the pills happily in a pill pocket. His foster Mom also is spraying the spot with Vetericyn VF (vet strength) gel. It has healed very well, about 2/3 closed already.

The foster Mom says "All in all, Norman is fitting in just fine."

Norman has indoor/outdoor access but tends to stay inside. The outdoor area is fenced and the foster Mom vaccinates all her cats for FIV. The FeLV cats are in a separate area of the yard that Norman cannot get to. 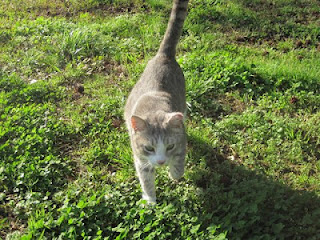 May 30, 2012--Norman is transitioning very well in his foster home. He is on a raw food diet and still off insulin. His foster mom had a pizza party that he was the life of. He is also now micro chipped. Click this link to view photos of how great he's doing http://s951.photobucket.com/albums/ad358/LeesFamilyKG/Norman/

May 12, 2012--Norman is now safe. He arrived at his DCIN foster home yesterday. His new foster mom says "He is beautiful and very sweet and might already be broken. Yay for low carb wet food!" His BG was 106 when she got him home.

March 21, 2012: A young, neutered, FIV/FeLV negative grey and white domestic short hair kitty who weighs about 9 pounds was recently rescued and needs a home of his own. 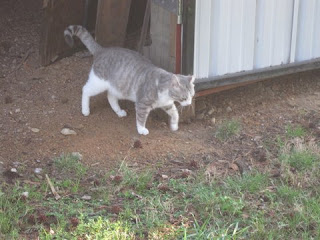 Here are some snippets of a narrative from his rescuer: Cats seem to come in waves around here and Norman rode in on the last one. He was one of four that I trapped a couple of months ago. Everyone turned out to be feral but him. At first I thought he was feral as well because he ran from me a couple of times . It wasn't until he came home from his visit that I realized what a sweetheart he is and quite handsome. However, no one answered any of the found ads that I ran.


Sometimes I let him out and he just follows me around the farm and helps me do chores. If you're standing still he takes the opportunity to rub all over your legs. I think he'd be quite comfortable in someone's lap.


He was trapped on Jan.16th and went straight in to see Dr. He tested negative for FeLV and FIV, got his FVR-CP, feline leukemia and rabies vaccines and was neutered. He's been living in the barn in a huge kitty condo since then. He does have a 6ish month old kitten living in the condo next to him, they enjoy each other.

Norman had been on the waiting list to go to a local rescue and was scheduled to go to them on Thursday, March 15th. It was the Monday before that, March 12th, that I realized that he was drinking and peeing more, we went back to Dr. and confirmed that he is diabetic. He is, by the way, very good about being crated and going to the vet. He's just happy for the attention. Until that Monday, I didn't see anything alarming about his habits. 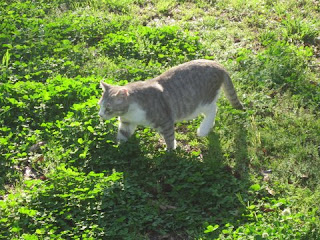 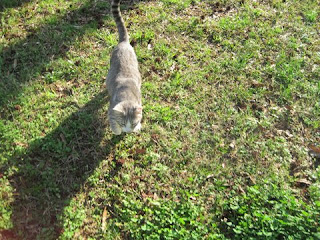 Currently on canned and dry Purina Veterinary Diet D/M. He has not been started on insulin. I'm not here consistently enough to manage that. Right now he's pretty happy but, he requires more attention then I can give him.
Posted by Jennifer at 10:44 AM