September 14, 2015 -- Because all of Tigger's sponsors had ceased their donations, DCIN's support for Tigger stopped in June 2014. However, when he was hospitalized recently for pancreatitis and anemia, DCIN opened a $1,000 YouCaring fundraiser for him.

July 25, 2013--DCIN continues to help Tigger when it can with insulin, syringes, and test strips. Tigger's insulin needs are finally reducing. He's now down to 30U shots instead of 60U shots.

February 15, 2012--This ticker shows the progress on raising funds for Tigger's SRT Treatment. Progress is slow, but I am happy to report that there are two subscribers who will be making monthly payments. (Removed nonfunctioning ticker.)

You can read below about Tigger and the fundraising options offered to help Brent and Tigger. These are the PayPal buttons.


Hello everyone, I would like to introduce my Tigger, a 5 year old Tabby who has a pretty bad case of Acromegaly. Tigger was presented to me 5 years ago by a cute starving Calico named Momma. It was a cold fall night and I heard a noise out on my patio and there was a tiny 2 week old kitten barely alive. Momma was doing figure 8’s meowing at me. I picked Tigger up and he was still alive so I took them both in. Momma was flirting with me for weeks before she had her litter. I think she was checking me out as a future care taker of her kittens. Unfortunately she never went back for any other kittens so I think Tigger was the last and why she brought him to me. 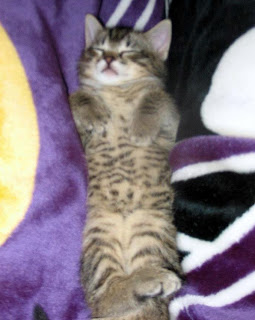 As Tigger got older I noticed he meowed when he was in the litter box and wow could he pee. Never before have I seen a cat pee so much! Not knowing anything about diabetes I took him in and his BG was in the mid 400s. All the Vet could tell me is here’s some caninsulin and dose him 1u twice a day. He said there wasn’t any more they could do and come back from time to time to get him tested. Well, he never got any better. I joined the FDMB site and they helped me get Tigger on the right track with home testing and plenty of information and assistance about Feline Diabetes.

As Tigger rose and rose up the insulin charts faster than an Elvis single in the 50’s, we knew something else was going on. I was encouraged to get him tested for Acromegaly and IAA, for which he tested positive. After convincing my new vet for the tests, I had to come up with a new game plan. I joined Feline Acromegaly group where I currently post daily updates on Tigger and they provide a great wealth of knowledge and assistance with this horrible disease. Unfortunately Tigger continues to pick up speed and soar up the insulin charts as the Acro and IAA resistance fights back. I am currently up to 78 units of Levimir twice daily. He is also getting Tramadol injections for the pain of Acromegaly along with Regular insulin when necessary. Due to the high growth hormone output, Tigger’s appetite is through the roof. There are days when he actually out eats me calorie for calorie. It’s nothing to go through 8 cans of Fancy Feast and some boiled chicken. 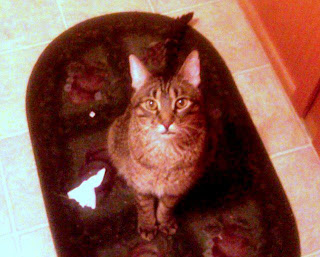 Unfortunately the costs to treat Tigger are starting to push my limits financially so I am trying to save up for a treatment called Stereotactic Radiotherapy Treatment (SRT) to eradicate the tumor on the Pituitary gland that causes the Acromegaly.

Tigger’s current monthly costs are just north of $600 a month and SRT is between $4000 and $8000 depending on the location. Saving is tough with a $600 monthly Tigger payment! But, I will do everything I can to help him through this ordeal. He had a rough start out of the gate and now has to deal with this. But at the end of the day, he takes it like a champ, even days when I have to poke his ear a dozen times or more.

DCIN would like to help the World's Coolest Dude and his Dad. DCIN is not actually fundraising for Tigger's costs, but is offering DCIN's tax-exempt status to allow Brent and Tigger and their friends to fundraiser for both his monthly costs and his SRT procedure. (Those purposes fall within DCIN's mission.) DCIN will administer these monies in separate monthly and SRT accounts in accordance with our normal accounting and cost documentation procedures.

In addition, DCIN is helping Brent and Tigger with testing equipment, and Levemir insulin when it can.

Below are four paypal options. For monthly costs, you can make a single donation or sign up for a monthly sponsorship. We offer the same two choices for the SRT treatment. (Moved Paypal icons further up this page.)

This is so wonderful! Thank you DCIN.. I hope the World's Coolest Dude will be able to get his surgery soon!

Aww what a sweetie.

If anyone is interested, here is Tiggers FB page. It will be 1 year since SRT on April 21st. I plan on posting an update of the past year.