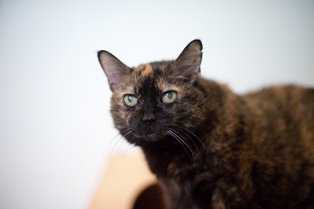 July 29, 2015 -- Sadly, Cricket left for the vastness on March 15, 2015, after a week-long battle with the herpes virus and inappetance. Boca followed her companion this morning. Angelwings and Godspeed, Boca and Cricket. ~Venita

January 24, 2013--Boca has HyperThyroidism. Even though Boca is older, she is an excellent candidate for I-131 radioactive iodine treatment, and she will be getting the treatment on February 19. We ask for your help--with good thoughts, prayers, and a donation if you can. DCIN is very fortunate to have been offered a generous rescue discount from the treatment center, but with the advance labwork and imagining that Boca has had, the cost is still $1,000. ~Venita

April 2, 2012--Boca and Cricket have made their way to Marty's Manor in Georgia and are settling in. Marty has detoxed Boca from dry food and Lantus (using DCH protocol), and has started Boca on beef-based PZI from Stokes Pharmacy, the insulin her two other diabetic cats are using. We are looking forward to some Manorly photos soon. ~Venita

DCIN started raising funds for these two cats when we thought they would be flying. Now that they are driving, we will be holding the $500 we raised for their foster costs.


January 12, 2012:  The shelter vet has agreed to remove the script dry diet food and feed Boca canned only.  She will be going back to the vet on Tuesday for a curve.

She is on Lantus, no hometesting yet, after Tuesday we may be able to send out supplies. 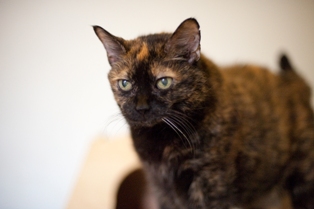 January 11, 2012:  We have learned that Cricket is actually 11 years old and not 18.  Below are pictures of the gorgeous kitties.

January 10, 2012:  We received notice about two senior kitties returned to the shelter today.  Only one is diabetic, the other is not.  The shelter would like to find them a home or foster together as they are so close.

Pictures are coming, the information we have now is as follows from the shelter:

Last month we had two cats returned to us who were originally adopted ... in 2001. Boca (15 years old) and Cricket (18 years old) were brought back when the adopter decided after having a baby and living in a small apartment, she could no longer adequately care for them. One of the cats, Boca, was just diagnosed as diabetic. We are looking for a foster home for her, since her insulin injections will need to be given every 10-12hrs, and her blood glucose will need to be monitored and checked. Because of the schedule of operations at the shelter, we can not adequately administer her insulin doses when needed long term since we are not staffed more than 8-9hrs a day.
Boca and Cricket were adopted out together, lived together for years, and returned together, so we would like them to stay together; however, we will need to separate them if it means Boca getting the care she needs in a foster home.We are willing to train someone how to administer the injections and monitor her blood glucose. Red Door will supply all food, medications, and equipment needed, as well as arrange any vet visits needed. Ideally, we would need someone to foster or adopt Boca permanently. The vet recommended that we keep her on the current diet (weight loss prescription food wet and dry).  She hadn't been tested for diabetes in over two years, so the vet wanted to focus on that and getting her started on insulin as soon as possible.  They will be determining the type of insulin and dosage tomorrow sometime.  I passed on your note about Lantus.  I will let you know when I hear more.  Do you disagree with keeping her current diet?  Should we eliminate the dry food?Boca (and Cricket) are FeLV/FIV negative.  Again, I'll check their files tonight and get you more information!
Posted by Jennifer at 7:41 PM

I certainly hope that child is never diagnosed as a diabetic

Oh, I'm so glad Marty can take these cats.