Charlie developed mouth ulcers and stopped eating end of last week.  They started him on a medicine for that but he still didn't eat well.  Then Saturday the doctor noted a grade III out of VI murmur.  Today when I went to visit him he was having labored breathing.  They took x-rays and saw fluid in his chest.  He needed an ultrasound but we couldn't  afford it.  I stayed with him all day.  Finally after a lot of thought we realized that with diabetes, possible lymphoma, and now anorexia and heart issues it was probably best to do the kindest thing.  His other foster mom and I were with him at the time.

January 23, 2012:  Information from the rescue person on Charlie:


Charlie is a 12 year-old domestic short hair kitty with diabetes.  He is neutered and declawed, thus indoor only.  He was diagnosed as diabetic in August of 2010 at a regular exam.  He has been very well regulated since then and hasn't had any incidences of DKA or hypoglycemia.  The only symptoms he has sometimes shown are those of increased drinking and urination.  He is current on his vaccinations and is FIV/FeLV neg.  He is at a normal healthy weight, and is a very good eater.  He eats Purina DM Diabetic diet, dry with canned for a treat once a day.  He has a great personality and is very friendly with a loud PURR; he is very fond of giving loving headbutts!  He is on currently on PZI-40 insulin twice daily, as well as several other twice a day medications.

When he was diagnosed his previous owners determined they would not be able to take care of him any longer and had brought him into the clinic for euthanasia.  As a vet tech I was in the clinic working that day, once I met Charlie I determined within 5 minutes that I could not allow him to be put to sleep.  I offered to take him in and pay for him until we could find him a great home!  (Unfortunately, I already have 4 cats of my own, several rescued, and cannot keep him or else there would be no question!)  He spent several months being boarded in the clinic.  But then, for over a year Charlie lived with another technician in her home while I continued to help with his bills.  She greatly enjoyed having him in her home.  When staying with his foster family he had his own bedroom, to be kept seperate from the other cats mainly because they needed different specialty foods.  He liked to sit in the window and sleep on the bed.  He got along well with the other cats, even playing with them.  And when he is at the veterinarian for a check-up or glucose curve he is great for his exam and blood checks. 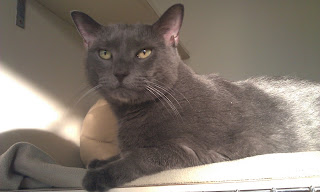 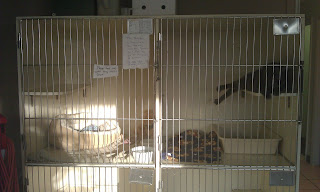 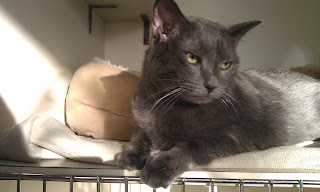 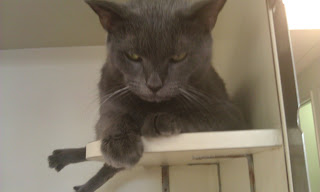 Currently Charlie is being boarded at the clinic as his foster family weren't able to keep him in their home any longer.  Luckily the person he was living with works at the clinic and gets to visit him regularly.  I have even spent time visiting him and he definitely enjoys his chances to walk and jump around!  We are actually looking for a new home or shelter for him as fast as we can get one.  He has gone from spending the past year and a half in a home to a large kennel.

Unfortunately, Charlie developed a urinary tract infection at one point which led to him urinating outside of his litter box.  He then began having bowel movements outside of his box as well.  After not being able to determine the cause for over several months, his doctor has recommended biopsies to determine if he has IBD, which is common in diabetic cats, or possible lymphoma.  Unfortunately, we are not able to afford the surgery at this time, but he is being treated with a medication which would be used in either case.  This lymphoma has been treated somewhat successfully in other cats.  Also, the medication he has been started on will hopefully clear up his litterbox issues as he begins to feel better!  That is being closely monitored at the clinic.  He also needs a dental, which we have been meaning to get him since he came into our care.


Charlie's other foster mother and I are doing EVERYTHING we can to keep him alive.  Unfortunately, he may be running out of time.  But we both feel sick with the idea of euthanizing him, as that's what we rescued him from in the first place!  But he can't board at the clinic forever, it's quite costly and it kills me that the life of this wonderful cat may come down to dollars.  (Unfortunately, I've also found out that one of my cats need testing regarding his own intestinal disease.)  Mainly, Charlie deserves to have a full home to roam in instead of a kennel.

January 21, 2012--DCIN is still trying to gather information about Charlie. He was taken to a vet for PTS about a year ago simply because he was diabetic. A woman who was working in the clinic at that time asked for a surrender instead.

Charlie's rescuer wrote us last week "We have recently learned that Charlie has possible IBD that can be treated with medication, or possible lymphoma that is actually treated with the exact same medication somewhat sucessfully."

Charlie has been in a foster home, but now he is boarding at a vet in Rocky Hill CT. His rescuer says he's 12 years old, fiv/felv neg, declawed, up to date on vaccinations, and regulated on his insulin. He has a great personality and would make someone a great cat.

We are still waiting for the rescuer to send us more information, but until we have that, we felt the need to start getting Charlie's story in front of potential adopters.

You can contact Charlie's case manager at Jennifer@DCIN.info.
Posted by Venita at 10:42 AM