I do have some very sad news. We had to put Simba down. Believe me when I tell you it was a heart wrenching decision for us, but we thought it was best for him, I couldn't watch hm suffer any longer. We, as well as Midnight, miss him very much.

After 6 wks of treatment, it was just not working for him. His numbers were off the charts. He still was urinating outside the litter box and he was always hungry to the point that we could not give him enough food to satisfy his appetite.

Thank you for all your time and energy you put into tying to find him a good home. Unfortunately sometimes things just don't work out the way we would like them to.

Simba is a 8 yr inside domestic cat. He is a very friendly and lovable cat. He spends his days laying in the front of the sliding glass door basking in the sun and watching the birds and squirrels. He loves to eat, his favorite is tuna and temptation treats. Unfortunately, he has developed diabetes and with our busy schedule, we can no longer provide him the proper care that he needs and deserves. We would like to find him a good and loving home. We will miss him, but I know there is someone out there just waiting to love him back!

Simba is about 30 miles northwest of Philadelphia. He is front declawed and neutered. He is a medium build and weighs about 12.5 pounds.

Simba is a friendly cat, sleeps on the living room sofa, until alarm goes off and then runs up to bedroom to be sure I will get up to feed him, loves to eat. Like to sit in front of sliding glass doors in the sun and watch the birds and squirrels. Not crazy about going to Vet, but once we get him in his cage, he is fine and friendly to the Vet 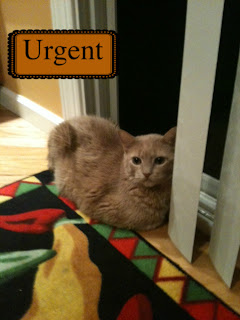 Simba is bonded to the other, 15YO cat in the household. He was diagnosed diabetic on October 8, 2011, and has no history of hypoglycemia or DKA. He went to the vet for inappropriate urination, but that has resolved. He is on Lantus (1U BID) and is not hometested.

He eats "9 Lives Dry - Salomon Flavor & Whiskas Prime Cut - Tuna & Salmon Flavors - as a treat 1/2 can tuna with added water & Temptation Treats". I believe the Whiskas is a pouch food, which would be high carbohydrates (35).

Simba's bean says he has no behavior problems and no other health problems. His shots are current and don't need updating until 4/2013. He is not at risk of euthanasia, but his beans would like to rehome him soon. Simba came to his current beans as a stray.

Simba's case manager is Celine at Celine@ dcin.info (remove space).
Posted by Venita at 7:38 AM

My sister had a cat who developed diabetes in his later years. She was convinced she'd never be able to care for him properly since she couldn't imagine giving him injections twice a day.

Fortunately, she soon discovered that she could do it and Mao didn't mind at all. He lived for several more happy and comfortable years, to the ripe old age of 21!

Please rethink giving him away, esp. if he's very bonded to his cat pal. The stress of going to a new family might make his diabetes worse in the long run.

Best wishes & loud purring from me and the 8 cats in our family...