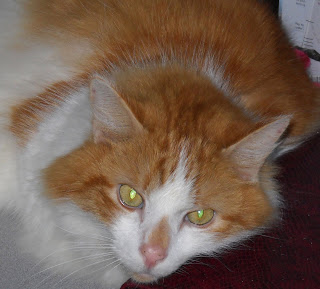 
Both vets have noted his records as Maine Coon rather than Maine Coon mix. I was surprised, but since he has filled out, I have to agree. He is a striking example of a Maine Coon.

Thank you so much Claudia for giving Cardinal the heart and home he deserves. Enjoy your life, Cardinal. It will be filled with joy and love. ~Venita

November 8, 2011: Someone is feeling great and looking even better. Renamed Cardinal, Peanut's  very happy in his foster, maybe forever home.

He saw the vet yesterday and is doing much better, BUN is normal, the creatinine is coming down (2.8 now), and the potassium is at the low end of the normal range, teeth are fine but his ears were very dirty, filled with yeast. He had matts removed and goes for a recheck on his potassium in one month. For the next two weeks he'll receive oral potassium twice per day, the following two weeks, once per day.

Blood sugar has been below 180, just this morning he gave a number that was too low to shoot. Fingers crossed he will be off the juice in no time. 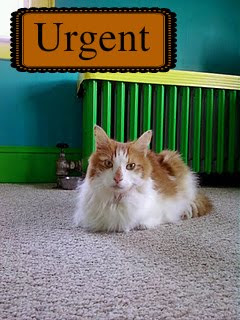 Here's what the vet who's treating him writes: "Peanut, a 12 yo neutered male, Maine Coon kitty. He was diagnosed with diabetes last week and in a ketoacidotic state at the time of diagnosis (just about comatose), so needed ICU care. The owners requested euth and I asked if I could keep him, because he had a treatable disease and they agreed. He is doing much better now... I don't know him well because this was his first visit ... but since he left his comatose state, he seems pretty friendly. He did live with another cat and Brittany Spaniel."

He is currently a part of an amazing rescue in CT called Our Companions Domestic Animal Sanctuary. They do not have a foster home available for him so he will remain with the vet.
Posted by Jennifer at 4:21 PM