November 29, 2012--MIKEY! is doing well these days, but there continues the little matter of $2,200 from his emergency hospitalization that remains unfunded. I am starting another chip-in to help Mikey's adoptive family with those costs.

(PS on 11/30/12--Because Missi's Love Auction for Mikey was very successful, we are able to reduce the chip-in amount to $1,650.) (Chip-in removed because the site closed down.) 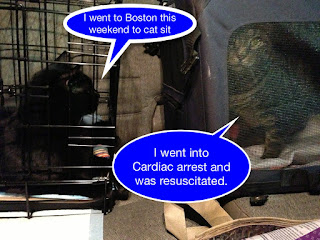 October 29, 2012--We almost lost Mikey. Over the weekend, he "coded" when the emergency surgeon induced anesthesia for exploratory abdominal surgery. The veterinarian performed CPR and was able to resuscitate Mikey. Plans for surgery were scrapped, and Mikey was put under observation. An ultrasound the next morning showed no sign of the blockage. Mikey's folks picked him up the next afternoon, as soon as they returned from a trip where they were petsitting for a friend.

There are still steps to take with Mikey. What was it that appeared to cause the intestinal blockage? Why does the abdominal imaging show massive amounts of gas? Why is he coughing/choking/pawing at his mouth, the initial reason for his trip to the vet?

But Mikey's little trip into the light has cost his folks $2900, and DCIN would like to help with as much of that bill as possible. Please help us help Mikey and his folks. (Chip-in removed because the site closed down.)

October 27, 2012--Our dear boy Mikey has been at the vet's office for a couple of days, and it appears that he may have an intestinal obstruction that requires surgery. We aren't sure yet. The diagnostics are ongoing but the last X-Ray did show there was something in his intestines that was blocking movement. Mikey will be moved to a specialty clinic today for observation and surgery, if needed.

This is reminiscent of Ennis for me. Ennis had to be opened twice during his lifetime for intestinal blockages.

We are collecting funds to pay for Mikey's surgery, should he need it. Can you help us with this cost for DCIN's FUNdraising spokescat? ~Venita (Chip-in removed because the site closed down.)

July 3, 2012--Mikey is having an emergency dental. He suddenly started salivating profusely and could not hold food in his mouth. Mama JennF took him to the vet where he was sedated for exam, and the vet found that Mikey needed two extractions. Because Mikey was difficult to sedate, the vet and JennF agreed to immediately perform the surgery.

Prayers for Mikey, please. And please help us help JennF with the bill. (Chip-in removed because the site closed down.) 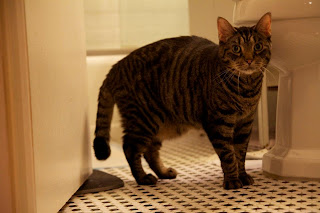 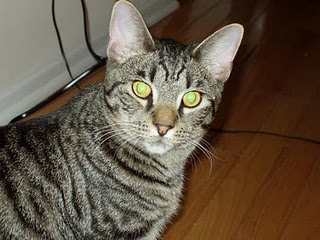 January 4, 2012:   Mikey is doing great in foster care, but his blood sugar is still not as low as his foster parents would like and we think that's because the vet said he needs a dental.  It's scheduled for February 1st.

If you'd like to help DCIN pay for this little man's dental so he can start to feel better, the chip in is here: (Chip-in removed because the site closed down.)

November 14, 2011--Mikey is now safe in DCIN foster care with Jennifer and Marc in Westchester County, NY. He is one of quite a few cats there and would like his own home. Please consider sharing your home and heart with Mikey.

November 12, 2011: Mikey's person needed to find a new situation for him very quickly and was going to list him back on Craigslist and was also thinking of taking him to a shelter. We know what usually happens with diabetic cats in shelters so DCIN put out a plea for Mikey.

Jennifer and Marc in NY have agreed to foster sweet Mikey. Both are new to feline diabetes but not new to rescue and certainly not new to special needs. We know that they will take great of Mikey while fostering him but hope we can find him a fantastic forever home soon.

At only 9yrs old he has a long life ahead of him and would be a wonderful addition to any home. He's easy going, front declawed, and likes to sleep with his person.


Located in Upper West Side, NYC
Posted by Jennifer at 6:57 PM

Oh, thank goodness. If we didn't already have a ton of cats....