September 13, 2015 -- After almost four years of love in her foster home, Spivey became an angel today. Spivey had developed a thoracic mass that was stressing her heart and lungs. We wish her safe passage and sympathy to all who love her. ~Venita

July 16, 2014--Spivey is doing well in her foster home. Being in permanent DCIN foster care, DCIN assists with veterinary care when the foster family needs it and DCIN can. Spivey urgently needed a dental, and DCIN was able to raise the money to pay for that. Spivey's bloodwork also makes her appear to have HyperThyroidism and her foster family would like her to have the radioactive I131 treatment. DCIN will be helping with that as much as possible. ~Venita 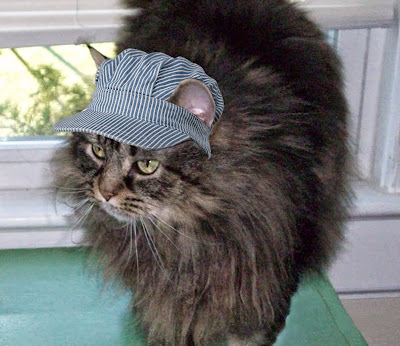 January 3, 2013--Because Spivey has generated no adoption interest and after a year she is very well integrated into her foster home, DCIN and her foster Mom have agreed to a permanent fostering arrangement. This gorgeous Maine Coon mix is staying put. ~Venita 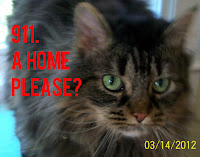 June 5, 2012--Spivey is still in DCIN foster care in the Tidewater area of VA. This past week we have had Spivey to the vet twice because she was favoring a back leg. She had X-Rays and had her leg shaved and there is no obvious sign of trauma. Her foster Mom has Bupe for pain--just in case--and will be keeping Spivey in a crate for most of each day to keep her from using the leg too much.

Spivey's foster Mom says that she is quite the Chatty Kathy.

The more I look at Spivey, the more she reminds me of Patti's Boris.

May 10, 2012--We are moving Spivey to 911 because it has been much too long that she has been in foster care without a home of her own. These are some recent pictures of her.

Based on a request from a Facebook friend, I asked Spivey's foster Mom how she gets along with other cats. This was her answer.


Spivey has her own bedroom, the door to the rest of the house stays open all day. Spivey rarely comes out of that room to interact with anyone. She tolerates my animals (two small male dogs and two female cats) going into her room but if they get too close she hisses and growls at them. She is very chatty and loves for me to come in and pet her. She is relatively low maintenance except she needs to be brushed several times a week....she mats up quick!! She also does not drink much water so she likes warm water added to her wet food and a couple drops of olive oil is needed or she gets constipated due to fur balls.

DCIN's volunteer animal behavior consultant will help anyone integrate a DCIN cat with resident cats. Beth has lots of time-proven suggestions to help a new cat fit into a household. The white paper she wrote for us on "Introducing Cats," which give a glimpse of her techniques is here.

February 29, 2012--Spivey is a gorgeous and healthy Maine Coon mix with a recent dental procedure. She is in DCIN foster care in the Tidewater area of VA. DCIN is moving her to Urgent for adoption because this girl really needs her own home and heart. 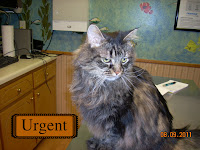 January 9, 2012--Spivey is all settled into foster care with Christy. She's doing well, toying with being OTJ.


Spivey is doing extremely well! She only requires a drop of insulin if any at all! (her average range is 75 to 120) She still has no interest in interacting with the rest of my fur family so unfortunatly she remains closed up in the spare bedroom. I need to get a digital scale so i can see how much she really weighs...find it hard to believe she only weighed 10ish lbs because she is hefty! I mix her aristocrat or fancy feast in with my raw chicken diet food she seems to love it!

December 11, 2011: DCIN will soon move Spivey into foster care with FDMB's Carolyn and Spot in Virginia. Sweet Spivey still needs her own home.

Spivey now has pearly whites as Dr. Martin gave her a dental procedure this past week.

Venita is Spivey's case manager. You can contact her at Venita@dcin.info.

November 28, 2011--Spivey is back in boarding at the vet's clinic. Dr. Martin's family did not want another cat in their home, and the vet clinic does not want a cat in boarding there. Spivey is a constant source of heartbreak and worry for Dr. Martin. Could we please find Spivey her own home and heart for the winter holidays? ~Venita


Spivey is doing well. She is on 1/2 unit of the Lantus insulin every 12 hours. She is on canned seafood feast fancy feast cat food twice daily. She is fit, active, and has normal water intake and urine output. Her playfulness and energy are outstanding. She does not act her age at all. She is very good about using the litter box and covering her waste.


Thank you for your assistance in finding her a real home.

I met Spivey this morning at Eagle's Landing Veterinary Hospital in McDonough, Georgia. I had a good visit and a very informative discussion with her vet, Dr. Alice Martin. 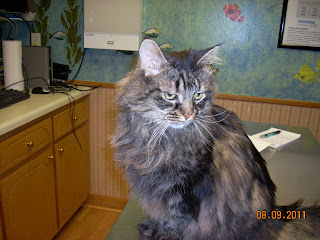 Spivey is a spayed, 10-yr-old (DOB July 20, 2001) pretty black and tan part-Maine Coon long hair female weighing 12.25 lbs. that has feline diabetes. Spivey is completely DE-CLAWED, front and back, thus she is not a candidate to live or visit outdoors unattended. 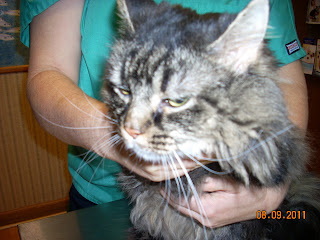 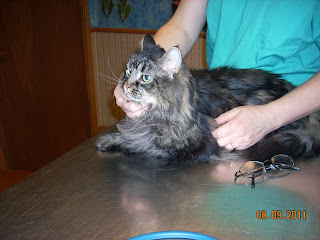 Her lifetime owners turned her in to Dr. Martin to be euthanized due to diabetes and inappropriate urination outside the litter box; she began urinating outside the box approximately mid-July. Spivey was tested by Dr. Martin and dx'd with urinary tract infection/inflammation, or "inflammatory cystitis." According to paperwork from vet, Spivey was treated with clavamox tabs, but there's also a notation mentioning "Convenia" under treatment plan along with an injection shown on August 6. Cannot determine if Spivey received only Convenia, or both Convenia and clavamox. Regardless, Spivey is now urinating appropriately, inside her litter box using regular clay litter.

When Spivey still had the UTI, she also exhibited an "awkward gait with a mild hunched pelvis area." Apparently this was related to pain and discomfort in the urinary area, and has resolved since the UTI cleared up. No other musculoskeletal issues noted. While I visited with Spivey, she jumped off the treatment table to the floor and walked around the room in a normal fashion.

Spivey is also being treated with glipizide 5 mg BID. Originally was receiving 1/2 tablet twice a day, but Dr. Martin has just increased it to a full tablet BID. Spivey's most recent BG on August 8, 2011 (p.m.) was 379.

Dr. Martin said she could not bring herself to euthanize Spivey; she has a hard time putting cats down. It does not appear that Spivey is currently at risk of being PTS, but obviously Spivey needs a REAL home because living in a cage in a vet's office is just not the ideal place for a cat.

Spivey has a very sweet temperament and would love to be LOVED. She enjoys rubbing and scratches, even from strangers. She takes pills well (typically in pill pockets). Currently her long fur is matted, dull and she has a good bit of dander. Dr. Martin will be giving Spivey a bath, along with cleaning her ears (even though there is no sign of ear mites, fleas, etc.). 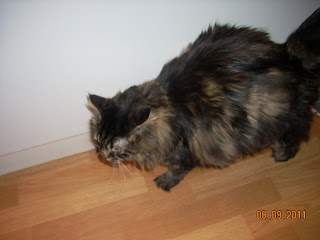 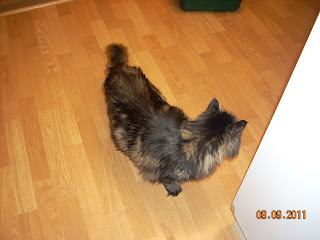 Spivey has no known disabilities; Dr. Martin just started treating Spivey in July so she does not have her vaccination history.

Spivey's teeth and gums are not TERRIBLY bad, but she needs a dental and Dr. Martin indicated she would do that for Spivey "on her dime." Dr. Martin also indicated she would run a panel of bloodwork on her to include testing for FIV/FLV, urinalysis, thyroid, etc. Spivey is currently eating Hill's canned C/D food, high protein/low carb, being offered a total of about six ounces a day in two servings. Spivey has NOT been microchipped.

Spivey's eyes were clear with no drainage; she has no ear mites or demonstrated hearing loss; heart sounds/rhythm were normal; lungs sounded clear with no wheezing or asthma; muscular frame is strong, no evidence of arthritis; no unusual lumps, swelling or other skin conditions (other than needing regular grooming); no vomiting, diarrhea, or any other gastrointestinal disturbances.

When Spivey was with her original owners, there was also a dog and another cat in the family (don't know about children). Apparently Spivey lived with no problem with these other animals, and again, I observed her to be sweet and easy-going. I got the impression she largely became an inconvenience to the owners once she developed FD and the inappropriate elimination. Hopefully we can locate someone who will appreciate her beauty and her need to be treated like the princess she is!
Posted by Venita at 7:03 AM