Dante Will be Placed with a Rescue 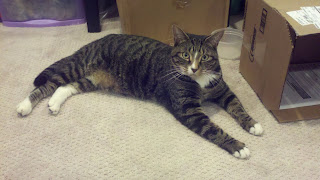 January 25, 2012--Congrats, Dante, for going OTJ and now being diet controlled. Recently, Dante's Mom again asked DCIN about rehoming Dante because her family is relocating to Hawaii on military assignment. Not ony was Mom concerned about finding housing that would allow pets, Hawaii has a quarantine requirement that the family does not have the time or money to satisfy.

Dante's Mom found a rescue organization that will take Dante and find him a new home. Therefore, because of that and the fact that he is no longer insulin dependent, we are taking Dante off our adoptables list.


We live in O’Fallon, IL, and have diabetic cat for whom we no longer wish to care.

(When I followed up with the Mom about this comment she said: "Dante's daily shots are a real inconvenience for us because we have to make sure we are available at that time. In May we went to a concert. A cat-loving friend offered to give Dante his shot for the night, even though she was quite nervous about it. Well, she gave the shot to the wrong cat. She did realize her mistake right away and give the shot to the right cat, but then she had to take our other cat to the emergency vet. My friend felt terrible, and so did I for putting her in that position.

"We also have family out of state whom we visit every Christmas. Right now we have no idea what we would do with him while we travel. We're a young family with a small child, and honestly we'd like to spend our time and money on other things.")

His name is Dante, and he is a neutered shorthaired tabby who will be three years old this August. He is not declawed, and I hope his new owners will be kind enough not to have him declawed.

Dante was diagnosed as diabetic a few months ago. We noticed that the litterbox needed cleaning and the water dish needed filling much more often than usual. He has never had an episode of ketoacidosis or hypoglycemia, but he continues to drink and urinate at a high volume. He is on 3.5 units of insulin in the morning and 3.5 in the evening. We feed him Wellness Core dry food, of which he eats a pretty large amount. I am writing this on Friday; Dante has a vet appointment on Monday in our continuing effort to get his diabetes under control.

Dante was born in my apartment in Huntsville, AL. His mother was a feral whom I rescued when she was pregnant. He has never lived with anyone besides me and was initially wary of my husband and fearful of all strangers. He has gotten braver over the years and can be a very affectionate lap cat at times. Other times he avoids people, but that’s just how cats are. I sometimes let him go outside with supervision. He is too timid to stray far from the house. Mostly he likes to nibble some grass and roll on the ground. If he sees or hears a neighbor, he will attempt to dart back into the house.

We have never tested Dante’s blood sugar at home with a glucometer. We do not have a history of his readings. He does not have any health issues, but I do not know the status of his vaccinations and he has not been tested for FIV/FeLV.

Dante is a very sweet, beautiful cat, but I just lost my job and caring for him is becoming quite a financial burden as well as an inconvenience.

Concerning Dante's relationship with the other cat in the household, and a "quirk":


As I mentioned earlier in this e-mail, we do have another cat. Bebe was abandoned by the side of the road when she was about six weeks old. The rescuer brought her to me because I still had Dante's mom at that point (he was about 5 months old). The mom wanted nothing to do with her, but she and Dante became best buds. They would sleep together and play together. They're not such good friends now; they only seem to interact when they fight. I don't understand the fighting, because in almost everything, Bebe is the alpha cat. Dante defers to her when it comes to food, toys, and even petting. If Dante is playing with a toy and Bebe approaches, he will stop, and she will start playing with it. I guess sometimes being second gets to be too much for him and he tries to wrestle her down and bite her neck. Then Bebe yowls and hisses and fur flies. Finally, when he starts to walk away, she runs after him. I totally don't get this relationship, but it appears to work for them.

Also sometimes he walks around yowling for no apparent reason.

Dante's Mom also has posted on the FDMB as Sosij.
Posted by Venita at 9:03 PM