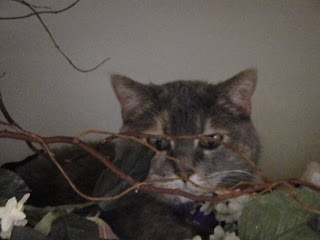 October 11, 2011--Mer became very ill. She was having trouble breathing and not eating without assistance. Dale took her to vets, including a radiology specialist, who reported that Mer might have heartworms. She also had a small hole in her lung that could eventually result in pyothorax (cause was given as possibly heartworms).

Mer's Mom Lisa retrieved Mer from Dale's care and Mer was euthanized. A friend of Lisa's wrote us:


Apparently, Mer had contracted an Upper Respiratory Infection, which complicated her Diabetes (hence the Clavamox). The vet was most expressive in the fact that there was no guarantee for Mer's recovery since the infection was so severe and the road to her recovery, if even possible, would be a long, miserable experience for the Mer. The vet read over the reports from your vet and informed that the best thing for Mer would be to just go to sleep.

Last weekend, Dale brought Mer to her house to treat her diabetes.Once she is regulated or into remission, she will go back to her Mom.