Welcome to the Bridge, Angel!!


For those of you who don't already know, we lost our Angel today. She has had an inflamed liver for quite some time and cysts that have been growing in size and number. Last night and this morning, it seems that 3 of them ruptured causing saddle thrombus and finally while at the vet a ruptured spleen.

It was a nasty soul-fucking day... and yet all I can think of, is that my pain is somehow eclipsed by the love that I can still feel...

There's a hole in the world... but I'll be damned if I can't see beauty all the way through.

May Angel fly free, and await the arrival of her most awesome family.

Michelle writes: Angel is not doing well. We took her to the vet yesterday, because she's thrown up a lot of liquid in the last few days, she seemed pale and she's barely eating. She had blood work and yet another ultrasound. (She has Chloangiohepatitis) The vet found two more cysts and her globulin level was very high, suggesting the inflammation has increased. Her kidney values also have gotten worse and the vet said that her one good kidney did not look good. Our most pressing problem however is that she is anemic. (18.9 ) It's been progressively getting worse over the last few months and the vet said we'll need to consider Epogen. We're supposed to go back this weekend to let her know what we decide. I don't know what to do. If I'm understanding this correctly...we don't really have a choice... but if we do give her the med, she might develop antibodies and it would become worse. I don't want to lose her. 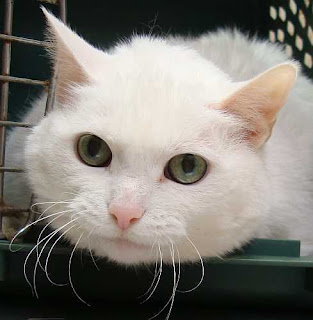 
Angel seems to be doing pretty well. The Oncologist we saw has an Internist that works with her and she had her review Angel's case.

After speaking with her (and my regular vet) we decided not to use steroids to treat her Cholangiohepatitis, due to her diabetes and the fact that she seems to be responding well without them. I feel comfortable with that decision - at least for now. Of course the steroids would also help with her IBD... but since it also seems to be under control right now, the risk seems greater than the benefit.

The Internist seems to really understand the risk that diabetes puts on already compromised kidneys and is very hesitant to do anything that might take her out of the diet controlled state she is in.

I'm just going to have to monitor her closely - a job I don't mind at all. :)

DCIN is making one final push on Angel's chip-in. Things are tight right now because DCIN also is fundraising for Tawny's emergency care. If you can help Michele and Angel, great!! We will add your donation to what DCIN has been able to raise of Angel.

October 20, 2011: We are saddened to learn that Angel is not well. Her loving family wrote the following: "Angel had an ultrasound a month ago and we saw what my vet thought was likely a dilated bile duct. Yesterday she had her follow-up and the news was not good. You can now see a very large mass on her liver.

She also has some thickening of the intestines and her kidney disease has progressed significantly."

Angel has been through so much in her life and has found an amazing loving family who cherish and love her so much. We hope that in some small way we can help by setting up a fund raiser to help with the oncologist visit.

June 17, 2011--Angel should be on her way home with new Dad Brian to new Mom Michele. Announcement post on FDMB.

My goodness. Isn't Angel's the most beautiful face?

Later on June 14, 2011--Angel has found a new home with a family from the South. The new Dad will be driving to MI to bring Angel home later this week. Congrats Mom and Dad. Welcome home, sweet Angel!!

June 14, 2011--Angel is a 10YO, white, front-declawed, spayed female, indoor, overweight diabetic. Look at those beautiful green eyes!! The cat's current owner of about one year has impairments and is not physically or mentally able to care for a diabetic cat. She is presently in foster care with the Kalamazoo Animal Rescue.

We have been told that Angel is sweet and easy to handle. She loves to be petted and is playful but not very active. Angel's latest home had no other cats, dogs, or children, and we are not sure of her history with other pets of kids. 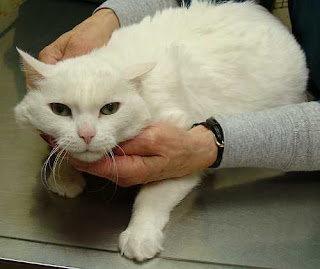 During a routine vet check earlier this year, Angel's glucose level was high and she was found to have a Urinary Tract Infection. She was treated for the UTI and rechecked. Her glucose level is still high. There is no known history of diabetic ketoacidosis (DKA) or hypoglycemia (low blood sugar). She continues to have high glucose levels because she is not being treated.

Angel tested FeLV/FIV negative and received a FVRCP vaccine in 2010. Angel is at risk for euthanasia because the rescue does not have anyone able/willing to treat her diabetes.
Posted by Venita at 9:19 AM

We're very excited to be Angel's new family. A huge thank you to DCIN for helping make it happen!