Mortimer at Home with Elizabeth 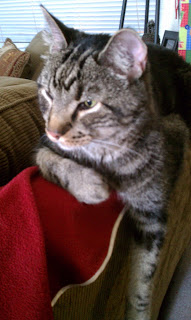 June 23, 2012--Mortimer is having trouble with inappropriate urination. DCIN sent him to the vet, who says it is stress related but doesn't want to start any medication just yet. DCIN sent Elizabeth some Rescue Remedy Pet (no alcohol) and Feliway to help with his anxiety. 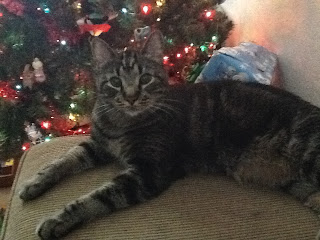 
"Wishing you, your family, and the the sweet kitties out there a very Merry Christmas!!!

Thanks for all you and DCIN do!

Love,
Mortimer and his Family

August 13, 2011--I just heard that Mortimer has been OTJ (Off the Juice or in remission) for almost a month. Congratulations Elizabeth and Mortimer!!

May 7, 2011--Mortimer owns Elizabeth. He's been OTJ for a couple of years, but recently Elizabeth noticed some clinical symptoms, tested him, and yes he's back to needing insulin. He previously was on PZI and Elizabeth posted on Diabetic Cat Care as emarie313.

This is a sucky economy, and there have been some personal issues that have driven Elizabeth to ask for help to care for Mortimer. How can your heart not go out to a cat named Mortimer? 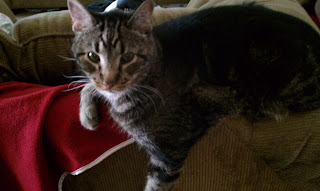 DCIN will be providing Elizabeth testing supplies and insulin. I was organizing my insulin stock yesterday and found a vial of ProZinc. Lately, some things have just been falling into place. 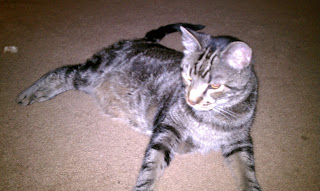 We would like to get Mortimer vetted--a basic exam and bloodwork--to get a script for ProZinc. I am hoping that will be under $150. Fundraising is difficult right now because all of our resources are being put into Tiko. But I will put it out there that we would like to have Mortimer vetted.
Posted by Venita at 3:23 PM