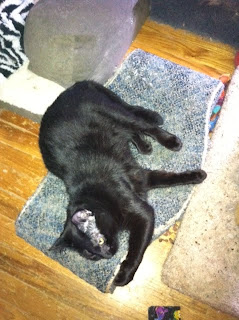 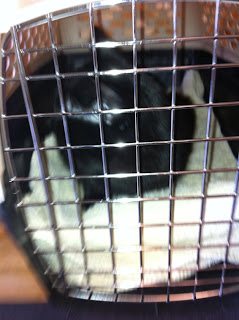 May 9, 2011--On April 22, 2011, Jennifer brought Ebony home. A local kill shelter contacted DCIN on April 15 about a diabetic cat at its shelter. This shelter has not in the past put diabetics on its adoption list. After efforts by DCIN with another cat, diabetic cats are now offered to rescues. If the diabetic cats are not "pulled," we fear they will be killed.

I copied Jennifer on my initial contact with the shelter. Jennifer had been looking to rescue another diabetic cat since her dear little man Tucker died.

On April 18, once we got some medical information on Ebony, Jennifer followed up on Ebony (I was out of town having surgery) and sent me an email that morning that she would be adopting Ebony that Friday.


Ebony is home, she's upstairs in the foster room chilling out. She was surrendered to [the shelter] on 11/26/10, was not adopted due to her crankiness. It wasn't until recently they realized her water bowl was constantly empty and checked for FD. Once confirmed FD they gave her all the food she wanted and her crankiness went away.

Lots of tears leaving, many of the shelter folks were very attached to her. 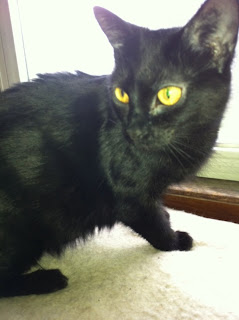 Ebony spent her first few days at Jennifer's in the foster room by herself. Early the next week, Jennifer spoke to Dawn Allen, the animal communicator:


From her past home Ebony does not know how to be happy. She was always hiding and frightened, felt scared all the time. She likes me and has a general good feeling about me and [my husband], that we're nice. She is concerned about the other cats and would like to not change anything right now. She is not ready to move in downstairs. She is afraid of men, but as mentioned, gets an okay feeling about [my husband].

She does not feel sick, Dawn did not understand how she was FD because she feels very healthy. I did tell Dawn that she's on insulin now and water intake is practically nothing since Friday. 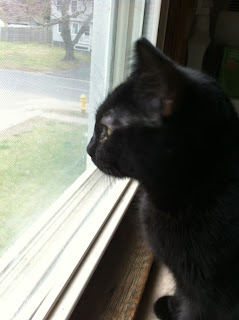 DCIN paid for a "welcome to the vet" visit, and Ebony is healthy. Jennifer has had a difficult time testing Ebony's BG levels. Ebony has claws and teeth and at first said no very forcefully. With Lisa and Merlin's help, Jennifer got some Feliway diffusers for Ebony's room.

Then Bean decided that she wanted to stay upstairs with Ebony. They didn't interact; it was just a matter of being in the same space. Bean had become an ambassador from the herd of furries on the first floor. 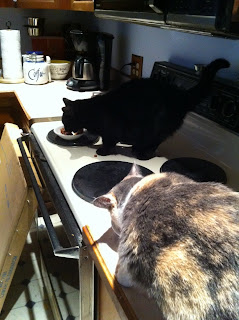 Then on May 4, Ebony decided to join the herd.

Holy moly!! Someone jumped on the counter and is eating with the cats like she owns the place;) 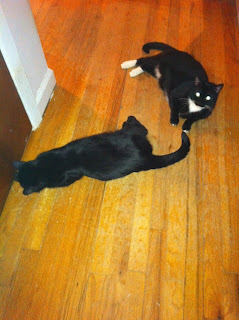 Bean with Ebony--They were playing with the basement door together. They are always together :)
Posted by Venita at 8:04 AM