Scratch Stays with his Beans!!

July 20, 2011--Scratch's Dad's orders have been rescinded and the family, including Scratch, are staying put. We are so very happy the family will be staying together. ~Venita

July 4, 2012--Our dear Scratch the Military Cat can't go to Korea with his family. The family has orders to go as of August 1, 2012, but Scratch, who is again insulin dependent, is not welcome in the quarantine facilities in Korea.

Scratch, AKA Little, is presently on duty at Fort Campbell, KY. He is a pudgy 15 pound boy that has been off-and-on insulin since April 2011. He will be six years old this September.

Scratch is an indoor only cat. He loves to go into the backyard when his family waters the garden or while they are sitting outside. "He will watch you water and play with the falling water trickles. His favorite thing to do is hide under or between plants and watches the birds. He can't get enough of "recess" outside but he gets scared by loud noises and will bolt to the door wanting in. He does not like to be outside without a human with him.

"He gets very upset when he goes to the vet. He will potty in his carrier. He is the sweetest kitty. He adores sitting on my 9 year old's bed and watch him play xbox or watch tv. When my son makes his bed, Scratch will jump up on the mattress and want to be made into the blankets or have stuffed animals placed around him then he sleeps.

"His favorite place to sleep is in a camping chair we got from walmart for 9 bucks one of those soft folding chairs. He has slept in one of those chairs his whole life so we make sure he always has one. He will not scratch the furniture but he will scratch on his chair. He is not a lap cat but wants his chair where I spend most of my time.

"We have a little Chihuahua and scratch is just fine around him. Because Scratch is so round he can't clean himself as well as he should so he gets mats that we have to cut off or try to brush out but he HATES the brush. He is good with a bath. We found that we had to put him in a bathtub after it has water in it, not while it is running or he gets super scared. We use a handheld shower head sprayer to rinse him or a cup but the bathtub must never be turned on or he bolts. He loves the blow dryer!!

"He cant have treats but he loved them so instead of treats we give him finely shredded cheese the Mexican mix. He loves it so much he runs to the fridge after a shot looking for his treat. We leave the restroom door open in our master bathroom cause he will join us at our feet EVERY time we are in it. He rubs on our feet and legs. That is my husbands man time with him."

Scratch's Mom says he is good with other animals but enjoys being able to get away from other animals for peace and quiet by using his chair or a bunk bed.

Scratch was diagnosed diabetic after his family noticed that he was vomiting and hanging out near the water bowl. He has not been DKA, but did sometimes hypoglcemic when he was on a vet-scripted high dose and the family was not yet hometesting. Scratch is accustomed to hometesting on his paw pads. He is on 5U of Lantus daily and is experiencing PU/PD and vomiting and "he goes into a dark quiet place and hides when he isn't feeling well."

Scratch eats 1/2 can of Fancy Feast classic chicken or seafood four times a day. "No bad behavior of any kind. he is our gentle giant. A very pleasing personality. He had shots last year and lots of tests and was good other than the diabeties." 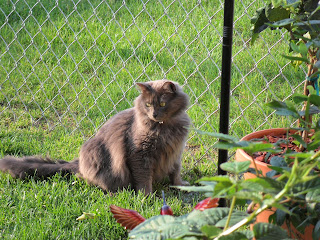 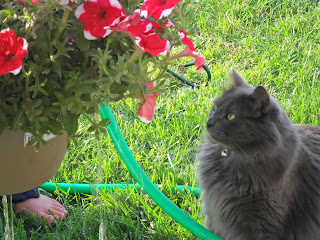 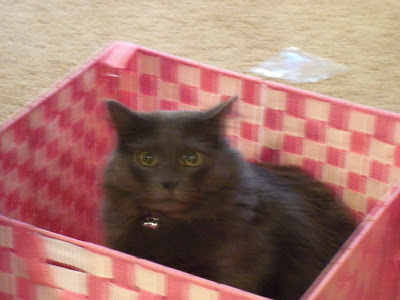 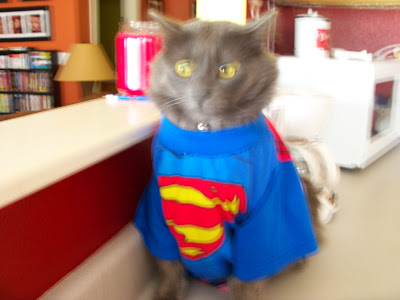 April 23, 2011--Sgt. Ronald M of the US Army is recently returned from deployment to find that his beloved Scratch is diabetic.


This is MY companion animal. I love him and don't want to see him suffer. If your organization cannot help me do you know who might be able to? We are willing to do what you ask if you will help us.

DCIN has sent Ron Internet links about hometesting blood glucose levels and FDMB, and information about buying a Relion glucometer and strips. DCIN has mailed Ron a Contour meter, test strips, and lancets for delivery Monday, and will send Lantus insulin when needed (Ron already bought a vial of Lantus insulin from the vet).

Scratch is in need. With a family of two children and three pets, Ron and his wife are living paycheck to military paycheck.


I would appreciate a rapid response because I do not have the money for his next appointment on next Thursday.

Next Thursday's appointment is for a blood glucose curve. Hopefully, Ron and his wife will learn how to hometest before then and will not have to keep that vet's appointment.

If you would like to help Ron care for Scratch's diabetes, you can send a PayPal donation to ennis93 @att.net (remove space). Use the "Personal" tab and the radio button for "gift" to avoid fees on cash and checking donations. If you use a credit card, you can choose to pay the fee to maximize your donation to the fund.

You also can email me at ennis93 @att.net (remove space) for an address for mailing a check or money order.

Please put Scratch's name in the PayPal note section or your check's memo line.
Posted by Venita at 10:41 AM