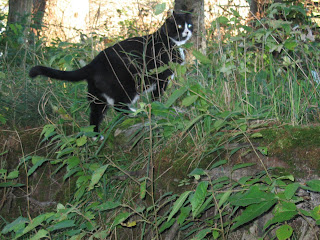 January 14, 2016--Dear Barry died today from a saddle thrombus, a blood clot, and needed to be helped to the bridge by his loving family. Till the end, Barry remained a loving and quirky boy, always dapper in his Tuxedo. You can read more about him on his 2016 calendar entry page.

Fly free, our handsome boy. Thoughts of you will always bring a smile to our faces. ~Venita

May 25, 2012--Barry's histology came back with no cancer. The lab is rechecking the sample for bacteria. Barry's incision is healing nicely. ~Venita

May 18, 2012--Barry has a growth on his back, in a location where he had recently received a Buprenix (pain) shot. He had it surgically excised this week. Lylene writes:


Poor Barry. He just wants to be a well dressed gentlecat in his tuxedo and they keep messing up his look. First is was shaving for the heart ultrasound. Then a bit at the neck for blood and at the sleeve/cuff for the catheter and then touched again for this surgery. Then they just took off half the back off his coat. Luckily they didn't get the trousers. Poor guy. At least the tux isn't a rental. ;)

April 5, 2012--DCIN helped Lylene pay for a heart ultrasound last week and the vet said there are no heart abnormalities that would preclude Barry from getting a dental procedure. Barry has some very bad teeth that make him wince when Lylene tries to pet his face. Barry, and his adopted sister Paisley, will both be getting dentals on April 20. Please help DCIN help Lylene pay for those procedures, and for the advance vetting that had to be done to make sure that Barry would not be at high risk during the procedure.

We are wrapping the chip-in for the two cats together and seeing how close we can get to $1,000 for both of them. The advance vetting to prep them for dentals cost DCIN $500.

February 28, 2011--Barry went for his dental on February 17, and the vet couldn't do it because Barry had a severe arrhythmia. Lylene and Barry live in a very rural area and services are limited. The vet contacted a cardiologist and did a "stat" electrocardiogram (ECG or EKG) through telemedicine and took x-rays.

Barry went back for a repeat EKG last week, for which DCIN was able to pay. The findings were consistent with the previous test. He is now on a baby aspirin every 72 hours for life and more meds may be needed later.

Lylene is very stressed over four of her five animals being special needs. Sick special-needs animals = bean anxiety. Lylene asks for healing vibes for all her animals, and I am sending as much as possible. I also send calming vibes for Lylene.

Initial post, 1/18/11--This is Lylene's Barry. They are members of the Feline Diabetes Message Board. Barry needs financial help to get a dental procedure, and DCIN would like to help. I'm looking for financial assistance in getting Barry's teeth cleaned. From Lylene...


The vet said the were very bad and given the diabetes could lead to problems.

Lylene is on disability, has health issues, and has several pets, some of them special needs. In December 2010, Lylene posted an update about Barry on the FDMB, including...


Barry was a shelter cat who was diagnosed with diabetes in June 2009. Some staff wanted to euthanize him due to the high cost of treatment. I immediately jumped online and found this site. I was amazed by the amount and quality of information provided. I printed out a lot of information for the shelter. Barry had such a great personality it seemed horrible to euthanize him. The manager decided to keep him and he was started on Lantus. Very shortly thereafter, she went on a two week vacation and I kept Barry. When she returned we decided it would be best for Barry if he remained with me.

I changed his diet to high protein, grain free canned food. Home testing was a struggle a first but we both got the hang of it. He had Lantus shots every 12 hours. His blood sugar finally stablized and he began to gain back the weight he had lost. On October 23, 2009 he surprised me with a BG of 18 and 16. I had not been testing regularly as I should have been. After getting advice here, we stopped the Lantus and monitored BG.

Lylene, who also is diabetic, has the supplies to spot-check Barry. 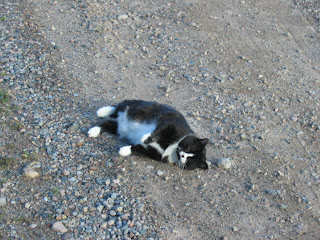 
All in all, he is doing great. I'm so very glad that he was not PTS. He's a funny cat. He helps with chores. It took the chickens a bit to get used to him going into their coops. Sometimes he joins the dogs and I and whatever other cats when we go on a walk. One day it was me, two dogs and four cats out for a walk. Wonder what the neighbors think. He and Little Brother have started wrestling and trying to eviscerate each other. His latest joy has been having the circular track with the ball in it propped up a couple inches in the back. It makes the ball come back to him and he spends a lot of time laying half on his back batting the ball as it rolls by.

The vet's office quoted a price of between $250 and $400 for the procedure. I will ask Lylene to get a line-item detailed estimate.

DCIN already has pledged $100 from its unrestricted monies for Barry's dental. The rest will have to come from donations.
Posted by Venita at 7:45 AM