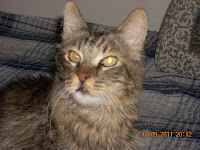 February 22, 2012--Dear Reagan passed away unexpectedly yesterday, February 21, 2012. He was a happy guy the previous day until evening when he started to act sick and then vomited. In a matter of a few hours, his blood glucose level was over 600 and he was limp. Gail rushed him to the ER and he was anemic and his liver values were too high to read. X-rays showed an enlarged liver. He was admitted in critical condition with no immediate diagnosis.

We have not heard more from Gail except that her sweet boy was gone.

Grant Reagan eternal rest, Lord, and let perpetual light shine on him. Grant Gail occasional peace as she journeys the road of grief.

February 8, 2012--Reagan has had such a hard time of things. Now he has to have an emergency whole mouth extraction of his teeth because of stomatitis. Gail cares so much for Reagan, but after all the medical costs from last year, this is just undoable on her own. Her vet is saying $2,000 to $4,000 for the procedure. DCIN has offered to do what it can, and would like to raise $1,000 to help. Please help us help Gail and Reagan.

October 29, 2011--DCIN circulated this courtesy post of Reagan for awhile in 2010. FDMB member Gail (and Houdini) announced that she adopted Reagan on 10/23/2010, apparently a week before he was to be destroyed.

A year after that adoption, Gail wrote a one-year anniversary post about Reagan on FDMB's Community Board. I had been unaware that Reagan had been through so much--
If I had been aware that Reagan had had such health problems, causing such financial hardship for Gail and her family, DCIN would have stepped in before now. This week, DCIN paid $400 for future vetting costs, which got Reagan a senior check up (he is doing well) and will get him most of a dental.

This is a picture of Reagan...with his hair grown in after his adoption but before it was all shaved again in June for his gall bladder reconstructive surgery. 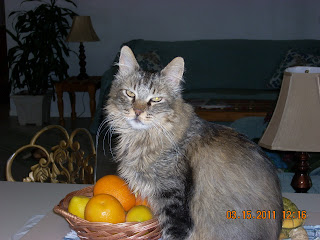 What a lucky boy Reagan has been to find such a welcoming home and hearts.