October 31, 2013--It seems I failed to announce here way back that dian adopted Twinkie. But Twinkie, dian, the DCIN team, and all of Twinkie's friends knew that Twink had been forever home. ~Venita 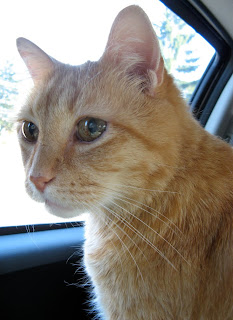 April 16, 2010--Twinkie has been in a foster home for four months. We have been trying to rehome him together with his brother, Beasley. However, the time has come to separately present them for adoption. Twinkie is an 8 year old, neutered male, short haired, insulin-dependent orange tabby. Might you be this extra sweet boy's forever person? Beasley and his brother found their Mum and each other early in life. Sadly, last fall Mum went into a domestic abuse shelter and had to surrender her cats to an animal shelter where they were to be euthanized. But a caring group of people owned by diabetic cats are sponsoring them in a foster home. Twinkie has been eating non-beef, non-fish, wheat gluten free canned Fancy Feast. He also loves raw food, but he gets a special version made with lightly boiled chicken because of his questionable FIV status. Twinkie came to his foster home slightly overweight, but now weighs a perfect 11-ish pounds. Twinkie is a loving cat, on his own terms. The video below was taken just a couple days after moving into his foster home. Twinkie will follow his foster Mum, comes when called, allows Mum to hold him. But he is pretty much a loner. He likes to lie by himself although will spend a little time with Mum and will jump on her lap but does not stay there long. He loves head rubs but anywhere else it seems he is sensitive to touch. Twinkie gets along well with Beasley. Twinkie has had little exposure to his foster Mum's own cats, and has hissed at them and at dogs (but has not lashed out). His foster Mum believes that with proper introductions and in the proper environment, Twinkie will get along. Twinkie was diagnosed diabetic in October 2005. Before he came to his foster home, he was on NPH insulin and his blood glucose levels were not being hometested. There is nothing in the vet records we have to indicate Twinkie has ever shown clinical symptoms of diabetes, and he shows none now. There is no recorded history of diabetic ketoacidosis (DKA) or hypoglycemia. Twinkie receives Lantus insulin shots twice a day and his blood glucose history is here. His insulin needs are reducing as his diabetes becomes better regulated. Twinkie had a dental procedure in December 2009 and has only 3 teeth left. He has had no recent or current urinary tract problems. He consistently uses the litter box. He is up-to-date on vaccines. Twinkie tests FIV+, but we cannot tell whether this is the result of vaccination antibodies or from the virus. He does show pretty constant symptoms of an upper respiratory problem (runny eyes and sneezing) and is on Lysine and occasional antihistamines for that. Twinkie licks and pulls hair on hot spots. He has been vetted for this, and treatment has included Zyrtec and Chlortrimaton antihistamines, non-steroidal anti-itch cream, Lysine, 4Life Transfer Factor Classic, fish oil (omega-3), diet changes as described above, humidifier, an e-collar, and antibiotics. Only the e-collar has helped by barring him from getting to the hot spots and allowing hem to heal. The foster Mum does not believe the hot spots are itchy because Twinkie does not scratch. He starts to groom, becomes obsessed with an area, and grooms until it is raw. Because of his diabetes, we have not treated him with steroids. The vet also has prescribed Buspar (anti-anxiety medication) in case this is an obsessive/compulsive disorder. The vet records we have on Twinkie are available for inspection. If you have no experience treating a diabetic cat, not to worry. Two diabetic cat Internet support Boards with a combined membership of over 1,500 people can help you learn the proper treatment and feeding of diabetic cats. Depending on your location, we can give you a “hands-on” demonstration of home testing blood glucose levels and insulin shots. DCIN requires an adoption application, will interview potential adopters, and will call vet references. We can arrange transport for Twinkie to his new home. DCIN will pay $200 for Twinkie's future vet bills.
Posted by Venita at 1:02 PM