Beasley has Gone Ahead

July 18, 2012--Mr. Beasley enjoys the last of his time on Earth before moving on to his next incredible journey. 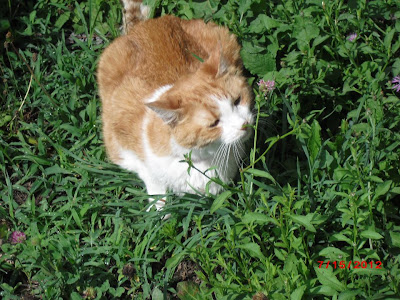 July 14, 2012--Dian took Beasley to the emergency clinic today. Based on exam, bloodwork, and X-rays, the vet says that Mr. B has metastatic cancer, probably liver-origin cancer. It is wide-spread, including throughout his lungs. The vet said he might have a week.

Beasley will go to the bridge tomorrow.

Dian said that even though the end result will be the same, she is comforted that it is not FIP. I think she also seems comforted that she was able to get more-thorough and definitive diagnostics done, thanks to generous donations from those who love her and The Boyz. With the answers from emergency vetting, and even though it still hurts incredibly to lose him, dian hopefully will have no doubt that she is doing the right thing by her beloved Mr. B.


July 13, 2012--Beasley has been unwell for a couple weeks. He went again to the local vet on Wednesday and that vet said that the differential diagnosis (ddx) (the possible diagnoses when alternatives are possible) is cancer and FIP. We had an initial misunderstanding that FIP was her conclusive diagnosis and we announced that. We also found out that Beasley is FIV+.

Using the local vet's guidance, Dian started Mr. Beasley on a palliative dose of prednisolone. He immediately responded. Dian and I also have done some Internet research about FIP.

What Dian and I have decided is to have her take Beasley to a veterinary specialty hospital for more thorough diagnostics. The local vet is sending the referral today, and Beasley will likely start with an internal medicine specialist, moving onto an oncologist if that is the appropriate track. Thankfully, Dian has all of next week off work and will be able to take Beasley where he needs to be when he needs to be there.

I expect that the initial diagnostic workup by the specialist will involve imaging (probably an ultrasound) and the removal and evaluation of Beasley's abdominal effluent. I expect the initial treatment plan to involve removal of the abdominal effluent, continued predisolone, and broad spectrum antibiotics. Perhaps also pain medications as needed.

Dian and I will do our best to keep you all informed of the diagnostic steps and treatment plans. I know that many care deeply for the charismatic Mr. Beasley, and may have personal experience with similar symptoms that could help the veterinary specialists, Dian, and me decide what to do.

Also, unfortunately, I have to ask Mr. Beasley's friends to help DCIN pay for these diagnostics/treatment. These are PayPal buttons for that purpose.

They both have e-collars on. They have been and still are on Zyrtec [a second generation antihistamine]. Increased to 5mg/day. Stopped the anti-itch cream because with e-collar on, they are healing. The vet put them on an antibiotic, which appeared to do nothing. They have received flea medication. Beef has been eliminated from their diet, and now on Buspar. Personally I think it is a obsessive compulsive disorder because they will start grooming and then over groom one spot and start pulling out hair. It is not ringworm, mange, staph infection of skin, flea allergy, beef allergy, and the only fish they get is fish oil and that is one little cap squeezed out in AM. So will keep collar on and continue with Buspar and Zyrtec at least until Zyrtec is gone. Not sure it is really doing anything cause they do not appear to be itchy. They follow you around like puppy dogs and come when called. Twinkie this AM, when I opened the fridge (we have a commercial fridge), climbed in. Was so cute. 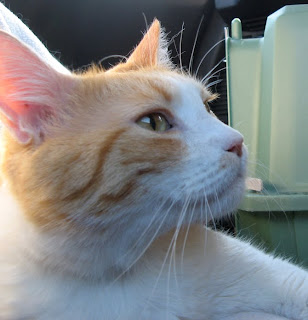 The Orinch Boyz are Beasley (left) and Twinkie. They are a highly bonded pair of orange tabbies, thus the moniker "The Orinch Boyz". Those who have orinches know the loving personalities those tabbies have. Here is a video of Twinkie giving dian love. This is a similar video of Beasley. These videos were taken only days after the Boyz got to dian. It's going to take work to find these Boyz a home together (which we all prefer). The back story on Beasley and Twinkie is that they were surrendered to a kill shelter because of a domestic abuse situation. Their mom surrendered them when she went into a shelter and could not keep them. Both boys are about 8 years old. One has been FD for 7 years, the other only a few months. Twinkie has tested positive for FIV, but we don't know whether he has the virus or was immunized for it. Both Boyz have received a dental. Neither cat has many teeth left. Please consider opening your heart and home to these love bugs. The FDMB Cats in Need Fund will raise $500 to pay future vet bills for the person who gives these two the furever home together they so deserve. If they are adopted separately, the fund will raise $200 to pay future vet bills for each. Now for fundraising. dian offered the Boyz a home provided she could get financial help for everything associated with temporarily caring for them--food, litter, insulin, syringes, test strips, lancets, vet visits.... If you would like to help support dian in her care of the Boyz, you can donate through PayPal to the FDMB Cats in Need Fund (Ennis93 AT att DOT net). I know this is a hard time financially for most of us, but even a small amount will help. All donations will be used for the care of the Boyz, either in dian's home or in the furever home(s) we have promised dian we will help to find for them. Some people are sending supplies to dian in lieu of monetary donations. That works too.
Posted by Venita at 1:41 PM