April 4, 2012--From Claudia: "No one ever inquired after him. He was happy and playful over the weekend. He is buried with his favorite catnip toy and a blanket. He’s in a better place."

You were home all this time, dear Doug. Godspeed and Angelwings.


I need to try again to get a decent picture of Doug. He is all black, but my pictures show him as mahogany brown in color. Nothing has changed with him. A lower dose Lantus kitty that is a real good boy. 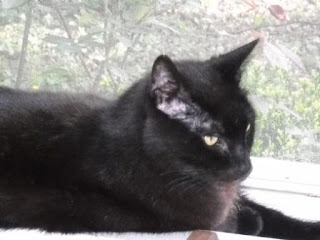 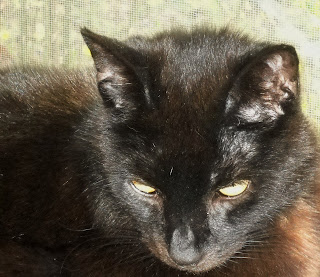 
Update January 25, 2010--Doug has moved down to foster with Claudia in Middleboro, MA. (Claudia also is fostering Pewter Boy and Rusty.) He arrived on January 16. Claudia writes:


Doug spent a few days in my office. He is easy to test (after he settled down). This past weekend, he decided that he would eat from the communal bowls, instead of by himself in the office. Watching the adaptation dance with the other seven cats in the house was fun. He talks a lot and made a huge vocal fuss over a soft toy he found. He was carrying it all over making all kinds of "Siamese" like sounds. Next weekend I will curve him, and see if we have progress toward OTJ [off-the-juice--remission]. If someone will take another diabetic, I now have 3 ready to go. Five diabetics is certainly eating into my syringe stash (10 a day for them plus at least 4 for me).

Connie and Em of the FDMB has a foster diabetic ready for adoption. Connie keeps a blog about her kitties, and these are the entries about Doug. Doug is owned by H.A.R.T. of Maine. This is what Connie wrote on the FDMB about Doug.


I am fostering Doug for a local shelter, so if you are interested, I can connect you up to them. I really believe Doug has some Siamese in him, as he has that longer face, and LOVES the sound of his own voice. He's also quite determined and strong of spirit like the other Siamese cats I know. He is adjusting well to being in the home. He probably could free roam in the home, but I'm just not ready to do that to my kids at this point. He's here for four more weeks, then he's headed down to Claudia's (cjleo) (in Massachusetts). He's currently eating raw (took to it very well - but does eat canned and was eating dry at the shelter) and is on Lanuts. He was on PZI but I think he needed TID dosing on PZI and I am not in a position to do that. He's still settling down on his dose, so he's not all that well regulated at this point, but I can see it happening. He was diagnosed with pancreatitis. But at this point we are simply dealing with the high BGs, and his catly attitude. He does love to sit and display his beauty. He also enjoys attention. He's not a jump up in your lap cat, but he doesn't mind one bit when I pick him up for attention, and is VERY good (and bleeds very well) for testing. My Ollie is a grumpy grumpy man, and doesn't really want Doug roaming around, so he's under strict supervision when he wanders, but as you can see from the videos that he gets along well with the attention of my other kitties.

In response to questions, Em said that Doug is 6 years old, currently has no behavior issues other then waking her up at 3am (which she thinks she has licked with a timed feeder to keep him distracted). He had pancreatitis, but that seems to be ok.
Posted by Venita at 7:44 AM