October 2014--Update from Little Silver Animal Control. New behavior assessment! Snowball is OK with other cats. She actually is living with another cat in their cattery. She is OK with dogs too! Although they love her they would love even more for her to find a real home. ~JennF

November 13, 2013-- DCIN received a donation today that will completely pay for Snowball's transport to her new home. Now we have to find that home. Snowball has been shuffled around so much, and a resident at the vet's office for seven months. Snowball really needs some TLC and her own home and heart. ~Venita 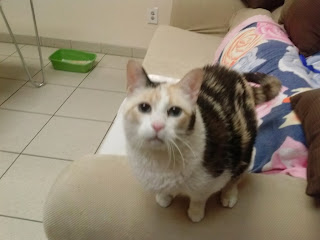 November 4, 2013--Snowball, "with her beautiful blue eyes," is still at Little Silver Animal Hospital. She is on 2u Lantus BID and eating Dry DM and regular wet food (she doesn't like DM wet). She is also on Prozac because she didn't like the other cats being around her and she inappropriately pees in her cage. The prozac has not really helped. She is no longer near other cats and still pees on her bedding or scratch post. She is kept in the kitchen all day and caged at night.

They feel like no one will ever adopt her. They send emails to over 1000 clients and only one showed interest. Neither her owner or the woman who pulled her from the shelter call to see how she is. ~JennF

April 13, 2013: Snowball is a beautiful young lady who was surrendered to a shelter with her son due to owners moving and not being able to take the kitties with them. At that time there were no medical issues.

Adopted quickly, she was returned soon after due to a child's allergies. Again adopted and this time returned for litter box issues.

The shelter discovered she had diabetes. Litter box issue seems to be under control when she's in an only kitty environment although it could also be due to sugars.

At the shelter she was at risk for euthanasia, a volunteer reached out to a local veterinarian and that clinic took her in. Now she needs a home of her own.

Snowball is a true lapcat, spayed, currently on Lantus 1.5 Units twice a day, eating canned and dry D/M and she is up to date on vaccines and FIV/FeLV negative.

Would she be ok in a home with a dog? We had a diabetic kitty, Rex - he was a Siamese and we are very understanding of the needs. We were thinking of getting a dog, so didnt know if she would be ok with a dog. We live in Arizona.

Please post an update on Snowball and put up another photo, as flattering as you can to help her find a home. Please do not post my email.

I have removed your contact information from the April 2013 entry about Snowball, Sally. DCIN can only post updates and new photos as provided to us by Snowball's caregivers. Because you pulled her from the shelter, perhaps you are local enough to the vet's office where she now resides to get more flattering photos of her. No one on the DCIN Team is close to her.