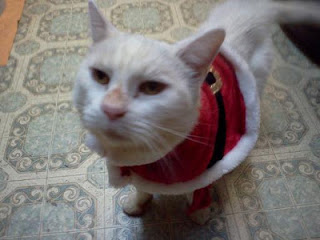 May 19, 2013- I received a text message from Belle's foster mom that Belle passed away this morning. Apparently she had a tumor that just got too big. "It was her time to go but she had a fantastic run". RIP Belle.~JennF

December 7, 2012--"Santa Belle". Not only does Belle walk on a leash, but she likes to dress up too! She was Wonder Woman for Halloween. Now she just needs to find a furever home. She is currently in a non-DCIN foster home. For more information please contact Sabrina at bostoncats@optimum.net. 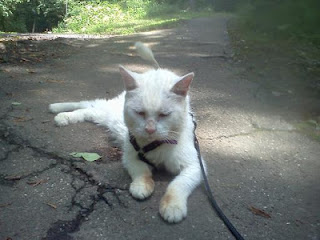 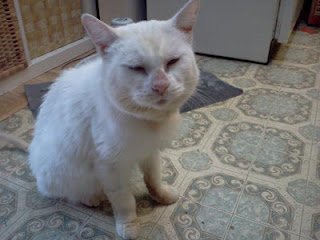 September 3, 2012---Belle's foster mom contacted DCIN to let us know she has pancreatitis. It was confirmed with a PLI test and Belle was sent home after a day at the vet. She is currently eating WD canned food and is on 2-3u of insulin for now. Luckily, Belle's caregiver works in a vets office and was able to treat Belle immediately.

July 17, 2012--Belle's foster mom went on vacation and had to board Belle in the vet's office where she works. Belle was not happy about that but is slowing forgiving her foster mom and even napped on her lap the other day for the first time. She is now getting between 5-7 units of insulin and her BG's are now in the 200's or lower. Belle is all personality. 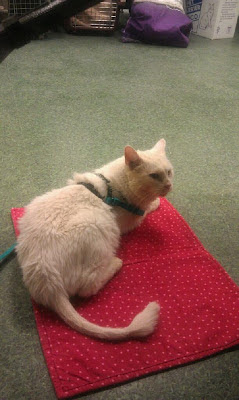 March 23, 2012--Belle is now safe in a temporary foster home. She has been put on Prozac to calm her down as there are 3 other cats in the household she does not really like . However, Belle is making progress with the others. She was out for over an hour with the other cats while they were sleeping. Belle loves to walk outside on a leash. Belle has a great personality, but a dominate personality and should really be an only.

She was rescued by a good Samaritan. When Belle was found she was matted down to her skin, full of mites and fleas, very underweight and had severed dental issues. Belle was scanned and found to have a microchip which should have resulted in a happy ending but no one came for Bella and her contacts are unreachable.

This beautiful girl use to live on one side of the Hudson river and was found dumped on the other. I highly doubt Belle made the decision to swim the Hudson herself.

Belle has since been diagnosed with Feline Diabetes, spayed, is up to date on all of her vaccines, tested negative for Fiv/Felv and had a full dental resulting in 10 extractions leaving this beauty with one single tooth standing alone. She is currently not getting along with any other cats at all but this may be due to the stress of being in a cage and afraid.

Belle is not doing well in her cage at the vet's office. She has already survived 3 put to sleep deadlines please do not let her get to another one. Let us show Belle humans are not heartless and she is not disposable. She is a fighter and will make someone a wonderful companion.
Posted by KittyPaws at 11:04 AM

We are caring for ten cats (one with lymphoma) two dogs, five horses and a rabbit + I'm on the wrong side of the continent and can, sadly, only offer prayers BUT could you please pass on the information from the microchip and let me try to find them or at least someone close who cares? I have a talent with such things (beyond most) and really want to help. Maybe even a lost owner who would thank God to have their poor cat back or a relative. Please give me a shot at finding. tonythecatman@gmail.com
Anthony

Anthony. JennF, the DCIN case manager, will show your comment to Belle's foster Mom. Belle is not a DCIN foster cat, so it is not up to us to take you up on this offer. Thank you for leaving your email address so that the Mom can contact you if she wants to pursue a search.