September 30, 2011: We are sad to report that Henry's person had to let this dear boy go the Bridge today.
She wrote the following: "It is with many tears and a broken heart that I let you know my sweet Henry was laid to rest this morning. While it’s still unclear after numerous tests and treatments, what exactly was causing him so much pain and debilitation in his legs, the cat neurologist believed we were dealing with a degenerative disease and there was nothing more we could do for him. Henry is finally at peace, and hopefully in kitty heaven, doing what he loved to do most: stalking, pouncing and running around chasing anything that moves."
Fly free little man, play and have fun at the Bridge.
September 7, 2011: Update today from current owner: "Just wanted to let you know we are starting Henry on B12 tomorrow, as well as Denamarin (a supplementto address those high liver enzymes). The vet doesn’t see signs of anemia or saddle thrombus, and has said she will post something on VIN. Thanks so much for posting Henry’s update—we really appreciate everyone’s thoughts and concerns for Henry. He seems to be in pretty good spirits despite everything! He is such a trooper. I will keep you posted on any changes."
September 4, 2011: At just two years old, Henry is very young to have had diabetes. He has been off insulin for almost a week, but there's no reason to celebrate just yet. Mom says "The way we discovered he had low bg was because I took him in because he was having trouble using his hind legs, and I noticed uncontrollable shaking when he stretched his legs out. I was sure it was neuropathy, but after examinations and blood tests, the vets are stumped (I even went to a second vet to get another opinion). Henry is not walking on his hocks, but has clear muscle weakness in his hind and now also his front legs. He can only walk a few feet and then has to lie down. He’s not even able to get up onto his window perch without assistance at this point."
Henry was checked for low potassium which can cause muscle weakness but his potassium levels are fine. He will be starting pain medication on Tuesday, after the holiday weekend. Mom will be doing more research and seeing another vet. We hope that what ever is going on with sweet Henry Honeypie, it can be diagnosed quickly so this little man can get better and find his new furrever home. 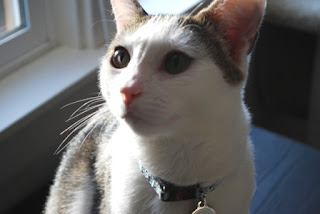 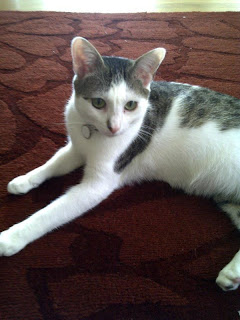 Henry Honeypie is a domestic short hair, his white fur with brown and black markings and spots makes him so very handsome. Indoor only, neutered and weighs about 12 pounds. Not sure how he is around dogs and children but would probably due well with a feline companion. 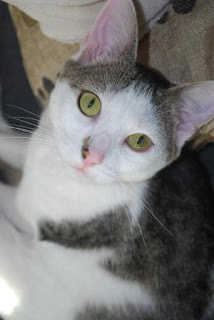 Henry may be a steroid induced diabetic and could possibly go into remission very quickly. See last paragraph about the steroid information. Diagnosed in September 2010, he was having digestive issues, low energy and drinking lots of water. It was originally thought that he was stressed from moving from New York City to California. One episode of DKA around September 22, 2010, Henry had to spend the night in emergency but has been regulated since then. Currently his appetite is good and energy level seems normal. He is getting 2 Units of Lantus BID, after meals, down from 2.5 Units BID. He is not currently hometested, levels are tested via Fructosamine tests and spot checks at the vet’s office. He eats grain free canned only and gets only freeze dried treats. Currently feeding him 1 ½ cans (3 oz) of food per meal. Using a combination of Natural Instincts (Duck and Beef flavor) and Soulstice grain-free food. He has a great appetite. He’d eat a lot more if I let him. He is up to date on vax and is FIV/FeLV negative. Owner says “Henry is shy at first, but warms 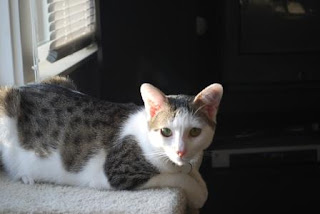 up quickly and can be very affectionate. He is really sweet, very playful and silly. He’s fairly talkative, and loves to knead. In the winter he sleeps in bed with me. When it gets warmer he sleeps on the carpet or sofa in the living room. He loves napping in the window. He has lapcat moments, but not for long. He’s really good at the vet up until the last two times I went, where for the very first time in the year that I’ve had him, I heard him hiss (Twice!). Not sure what happened there—he gets poked with needles a lot and maybe something happened in a previous visit, or maybe he’s just getting sick of it.”

Reason he needs a new home “My work increasingly demands that I travel, often on very short notice. I’ve had a couple of times where I could not find anyone to take care of Henry while I would be gone, especially during busy times like summer and the holidays. This is putting me at great risk of losing my job and has been a major source of stress.” Henry was found in an empty lot next to my friend’s home in Brooklyn, NY after one of our bigger snowstorms that year. They were unable to find the cat’s owners and I took him in. He was approx. 8 months old at the time. Henry is a real sweetheart, loves attention and does not like to be alone for long periods. He also does not like being held.

More information on sweet Henry, current owner says: "Henry received one steroid shot in June 2010. Somehow, it’s still a mystery to me, he scraped the back of his front leg on something. He gets a little acrobatic sometimes when he plays. Anyway, it was a pretty bad scrape and every time it started to heal, he’d start licking it and it would bleed again. So after a couple of weeks of this, I started to worry about it getting infected etc. so I took him in. The vet said he wanted to give Henry a steroid shot so that it would heal. It is a 3-week long-lasting steroid, which I later found out they give to cats sometimes that have been in bad accidents or fights, to help them heal—not typically for a scrape. Anyway, I asked the vet what kind of side effects this would cause and he mentioned he may be sleepier for the next few days. Well, Henry has never been the same since that day. He wasn’t just sleepy, he was out of it for a long time. The only thing he was interested in was eating and sleeping. He did not play at all for weeks and weeks. When I told the vet about his behavior, he said that Henry must have just had a bad reaction to the steroid. Bad indeed. It wasn’t until he was diagnosed with diabetes and regulated again that I felt his playful and affectionate personality came back."

Go to Pet Sitters International and see if there is a pet sitter in your area that will take care of sugar kitties. Most sitters, if you explain to them that you have the type of job that you may have to leave with little notice will take you on, even though you they know this. It's worth a try. I do sugar kitties all the time. Cats are much happier staying at home, and with that being said, talk to your vet and see what they have for boarding for last minute. If your office wants you to travel, you should be able to write off the boarding/pet sitting expense. More and more of my clients employers are beginning to recognize it as a business expense. If you really love your cat and want to keep him...talk to the boss.