9/7/14-- JennF has decided that Cheesedoodle isn't going anywhere. We give two thumbs up to his adoption. Welcome home, Doodle!! ~Venita 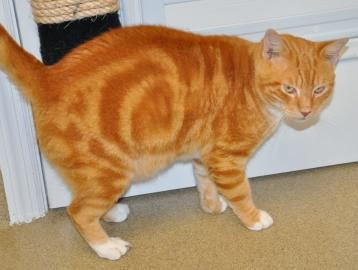 April 2, 2014--Doodle has now been in his "forever" foster home for almost 2 months. A few days after he got here he ended up in the vet hospital because he stopped eating. He gets stressed out easily. He is in a good routine now-more comfortable in his home environment and doing well on 2.5u to 2.75u of Lantus. At this time he is still being fostered but due to his anxiety with change JennF is not actively looking to rehome him. She has started a facebook page for him, Doodle ( https://www.facebook.com/DoodletheFIVDiabeticcat?ref=hl ), in which she hopes to spread information regarding FIV+, diabetic cats. ~JennF@dcin.info

February 12, 2014-"Doodle" is already settled into his new place. The resident cats were relatively friendly except for the other orange kitty, he might have felt threatened he was not the only orange boy in the house any longer. Doodle is eating Fancy Feast classic but really loves Tiki cat, chicken with consomme. He is very relaxed when being tested. His BG's on 3 units of Lantus have been ranging from 172 to 333.

February 8, 2014--Cheesedoodle took a flight from FL to NY where he will be living with JennF.

February, 5, 2014--JennF went to Florida and was able to take Cheesedoodle to her mother's house and watch him for a few days. Still just giving insulin once a day. He is very happy boy that walks around "chirping". He loves people and has declared his favorite spot the ottoman in the living room.

December, 2013--Doodle is now up to 3.5u of Lantus, still just receiving a shot once a day. Other than that he is perfectly healthy. He is now back in the FIV+ room at the shelter, sharing the room with just one other kitty that is not diabetic but able to eat the DM food.

May 29, 2013--"Doodle" was started out on 1u of Lantus daily. Due to lack of staff and volunteers at the shelter he is only able to get insulin once a day. He is now eating wet and dry DM food. He is being kept separate from the other cats as it is too costly to feed them all the DM food.

February 8, 2013--JennF found out there is a FIV+ kitty at the shelter in Florida she used to volunteer at that is now diagnosed with diabetes. He is a neutered, orange swirl tabby about 5 years old. He was adopted along with another FIV+ cat but he started to lose weight and the new owner was concerned and returned him to Florida Humane Society. Florida Humane took him to the vet and blood work was done that showed his glucose was in the 400's. He was prescribed Lantus. The shelter directly contacted JennF for help and DCIN is courtesy posting his need for a new home that can treat both his FIV+ and diabetes.
Posted by Jennifer F Alvarez at 2:12 PM