Dr. Watson is really a VERY SWEET AND LOVING BOY but he wants to be the only kitty in the house and can actually get very mean if it doesn't have ALL your attention only.

He is also very piggy still and VERY finicky in the canned food department. At this moment we are having a stuborn match to see who will win out. He currently only eats certain Friskies Pates but will only eat them sometimes. Stuborn boy hopes that if he holds out long enough I will give him hard food, which I will not.

As with all the FCRT kitties he is available to a good home anywhere in the US but I would like to know the person will home test him consistently and is strong enough not to be duped by this boy's stubborn nature of wanting hard food instead of canned. I'm sure if he is with me long enough he will get the clue that it won't work and give up but we aren't there yet. He is currently on 1 Unit of Levemir insulin twice a day with numbers between 200 - 300 (sometime he will hit 150s). 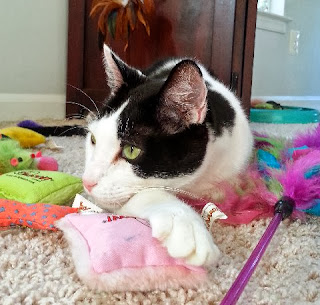 Watson is in a Fancy Cats Rescue Team foster home, sharing a room with other foster kitties. During his transition to this home, Watson often stays in a HUGE dog crate. He gets along with some cats, but if another cat acts like prey, Watson will attack. That is quite bold because Watson is a relatively small cat, about 9 pounds.

Watson's foster Mom says "He is a complete sweetie to people and VERY playful with lots of energy and will pour on the charm to try and get the one thing he wants in all the world--TREATS!!!! He might need a day to adjust to a new environment but then he warms up quickly, especially if you happen to have food. He even goes so far as to plop down on my lap and roll over and around giving me his best "I'm so adorable and sweet give me something good to eat" poses. He purrs it up and does not mind being picked up but has a bit too much energy to be in your lap for long. He is quiet the talker and likes to tell you all about his day when you get home. He would be okay with other cats as long as it is a very slow and proper introduction and as long as the cat is just as confident as he is." 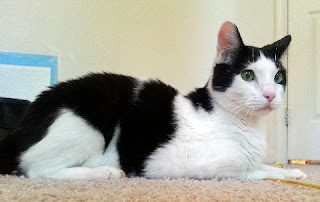 Watson's blood glucose numbers are beginning to stabilize through managed diet and insulin therapy. Watson might have some oriental in him with his talkative nature and his very cute, slightly crossed eyes. His Petfinder page says he is front paw declawed, but he is NOT.