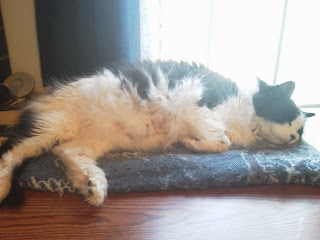 November 6, 2013--Mai Thai continues to do well in her new home. She has completely adjusted to life with the resident kitties and she loves to be brushed and petted. She can be found most of the time hanging out on her Dad's work desk and if he should leave the house, she lays near the front door waiting for him to come home. She loves her Mommy but is definitely a Daddy's girl. 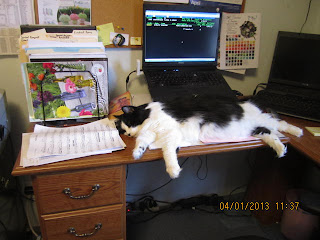 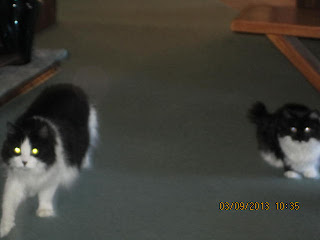 April 20, 2013--"Just wanted to let you know that Mai Thai is doing very well. She's coming out of her shell and is now roaming the house freely with all the other cats. They all get along really well, after an adjustment period. Mai Thai likes to play with our younger cat Bernie and sometimes she whips his butt!!!  LOL


For the first week we had her confined to the master bedroom, master bath, and my husband's office. She has now decided that his office is now HER room. When he is in there working, she spends a lot of time snoozing on a blanket on the corner of his desk, looking outside the window. She just loves watching the squirrels. And for some reason, she still likes to be fed in his office, as opposed to being fed in the kitchen with the other cats. So of course, we indulge her and do whatever she wants! In the evenings she likes to sit in the dining room in front of the wood pellet stove.  She is very happy here and we love having her here."

March 17, 2013--"Mai Thai is doing really well. She's one of the gang and has totally blended in now. She's found her comfortable places to lay and she loves attention. I don't have to worry about her at all. She's a great kitty and we love her dearly."


March 9, 2013--Update from Mai Thai's new Mom-"Just wanted to let you know that Mai Thai is doing great!! Most of the week we kept her in her various rooms of the house and let the other cats peek at her through the door. Then we let her out to explore the larger rooms of the house for short periods of time. The other cats were jealous, but not aggressive. Thursday and Friday nights we had kitty social hour with the laser light. A fun time was had by all and they forgot about each other as they were playing. Today she is still exploring the house with us only half paying attention to her. Some of the cats are getting more sociable with her or at least not staring at her full time. I'm sure by next week they will all be going about their own business as usual."~JennF

March 3, 2013--Part 2--Mai Thai has arrived at her new home. "She's doing good in her room. She ate almost a whole can of Fancy Feast but I wanted to go slowly with the food since I thought she might be slightly nauseated from the car ride. But she's doing good. Walking around the bathroom looking in every corner like she owns the place already. She doesn't seem like she wants to hide in a corner like I've seen other cats do. But we will give her some time to relax now. I put her mats down for her and brushed her a little bit. She very much likes being petted and doesn't seem afraid."


March 3, 2013--Mai Thai is on her way to her furever home. The car ride was very stressful for her but soon she will have her very own room to feel safe in. 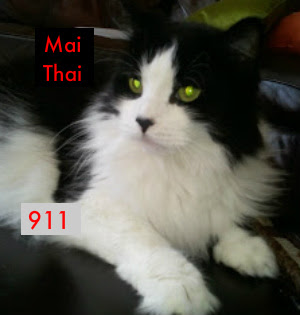 February 13, 2013--Mai Thai was diagnosed with diabetes at the age of 3. She went into remission for two years but in March 2008 was put back on insulin and is currently receiving 3units of Lantus twice a day. She is eating two cans of Fancy Feast tuna or chicken in gravy and gets dry food throughout the day. She does not care for the diabetic kitty food.

Mai Thai is front declawed and spayed. She loves windows and porches but is an indoor-only cat. She likes people but is not fond of small children, she will jump high enough to get away from them. She loves to play and will follow you around. She is not a lap cat but she loves to be brushed and petted. She is not a cuddler but will sleep at the foot of your bed. She is extremely lovable and quite a night talker.

Her current owner rescued her in  2004. Her owner got married in 2009 and her husband is not fond of Mai Thai. In 2010 when they started a family, Mai Thai went to live with her owner's parents. It was supposed to be a temporary solution until the babies were born and Mai Thai was supposed to return home but now the husband does not want her back and is keeping her in the basement. 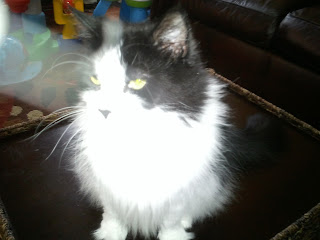 Hoping and praying for beautiful Mai Thai and that someone will step up and be this sweet kitty's hero!

I would have given up the husband. Jerk, poor kitty.

Need an Angel for Mia is she spnosored through DCIN?

First - DRY FOOD is the worst thing to give a diabetic cat. Fancy Feast is no better.

The diabetes go be reversed if his diet is changed. ONLY good canned food. www.catinfo.org

Poor cat. I hope he finds a good home this time.

I disagree with the comment against Fancy Feast. I believe that I have read this from Dr. Lisa, the owner of the catinfo.org site. "The worst canned food is better than the best dry food." I feed my cats Fancy Feast pate. Lots of diabetic cat caregivers feed that or the pates from Friskies, NineLives, Sophisticat, and other "bad" canned food. For some of us, the $2+/can "good" food is not within financial reach. And it's amazing how many cats won't eat the "good" stuff.

I understand that some might not be able to afford the better foods, but that does not mean that these supermarket foods are good. Just PLEASE read the ingredients. Do your homework. There is lots of good info out there at your disposal. And there are some decent foods a little more expensive than Friskies, NineLives, Sophisticat, and actually some are about the same price as Fancy Feast, which is full of junk. Cats become "addicted" to this food, and that is why it is harder to switch them to another brand. I have been with a rescue group for 13 years, and have met a couple of people whose cats have liver problems. They were feeding them Fancy Feast. When Dr. Pierson mentioned on her website catinfo.org that "The worst canned food is better than the best dry food", she wasn't referring to diabetic cats. Go back and read about Diabetes on her site.

Pretty dogmatic comment there. Remember, we are all pet owners and not nutritionists. Fancy Feast is perfectly fine, and many diabetic cat groups recommend the lower carb varieties of fancy feast for diabetic cats. There is indeed a difference even between Fancy Feast and Friskies, both made by Purina. the ingredients in fancy feast (particularly the meat) are slightly better quality.

technically, this whole conversation is called "hijacking the thread." the topic of the thread is finding a home for mai tai. i cannot do it but will keep fingers crossed. she's beautiful.

i got my severely diabetic cat Cricket from 600+ BG to remission working on insulin with help AND a diet of only Fancy Feast Classic, which she is still on. it is not crap, it saved her life. she is consistently 80-100 BG now with no insulin since last may. the group that worked with Cricket & me is hardcore about what you feed your diabetic cat and if THEY are OK with FF you bet i am. and so would Mai Thai. whose life is at stake here! just like cricket's once was. that's all that matters right now. getting her saved. valerie

I had 2 diabetic cats at one time. The older Terra and her daughter Munchie. Terra was diagnosed at age 11 and she lived for over 5 more years with insulin 2x per day. Munch was less forunate because she got mammary cancer not long after being found with diabetes. Both ate Friskies canned and I did try t he Hills prescription but they didn't like it. I mixed it with the Friskies sometimes. I wish I could take the kitty, she is really beautiful

I got my cat into diet-controlled remission on mostly Friskies. Lets cut the future owners some slack, there are people who might take her but can only afford Fancy Feast or Friskies and we should all be grateful they could give her even that. Sharing her pic again and hoping she finds a home fast!