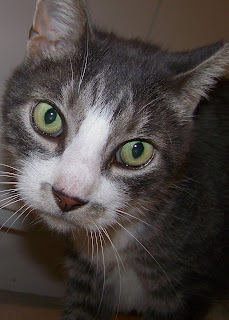 April 10, 2013--Charlie finally went to his furever home. He had his dental on March 25, 2013 and he stayed in the shelter to recover. He had to go back on insulin for a few days but soon his BG's were back down and he went home without needing insulin.

February 28, 2013---For financial reasons the shelter Charlie is in may not be able to keep him much longer. If Charlie is not found a home soon the shelter he is at will be forced to return him to his owner. This owner already said he would be euthanized if he was returned to her.

February 21, 2013--Update on Charlie. The good news is he has been off isulin for 3 weeks the not so good news is that he had a mast cell tumor from his back right hip removed. For "financial reasons and because mast cell tumors have a good chance of being benign in cats", the shelter chose not to biopsy the tumor. It would be wonderful for Charlie to find a furever home soon.~JennF@dcin.info

January 14, 2013--"Charlie is doing well and has gotten to like the wet food. Because he's in a cage for 16 hours overnight we do leave him with some dry food to nibble on-low carb, grain free. He takes his insulin without any fuss at 9am & 5pm. We are using a very small dose so it will lat us."


November 29, 2012--Charlie's appetite has not been so good. He ended up at the vets office where he received Sub q fluids and was fed both baby food and dry food because they needed to get him to eat something. He is still being very picky about his food but is eating enough and is getting insulin  twice a day. His blood work came back normal except for high glucose reading. Now he just needs a loving home~JennF@dcin.info 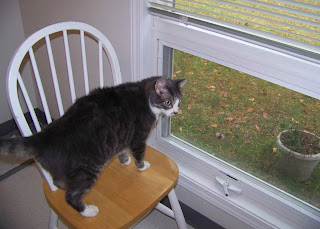 November 17, 2012--Charlie had a visit with the vet on November 6. He weighed in at 15lbs and had a blood glucose of 437. The vet stated "Other than an expected elevation of blood glucose and a very mild elevation of several liver parameters, the blood work was very normal." He has been very good about eating Fancy Feast wet food only and is even drinking and peeing slightly less. He will be starting Lantus insulin. He is in dire need of a home as the shelter he is in can not keep him forever. Contact JennF@dcin.info if his new home is yours.


October 20, 2012-- Charlie is currently in a shelter in NY, not getting insulin. The shelter seems willing to care for Charlie, but we all know the shelter environment is very challenging for a diabetic cat. They will keep him on Fancy Feast pate only, no dry food and no treats. I'm told he has no other medical issues.

I am waiting on more information from the shelter supervisor and will update Charlie's blog once I receive it. If you can give this little man a home, please contact JennF@dcin.info 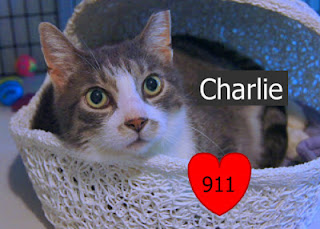 Posted by Jennifer F Alvarez at 9:16 AM

I volunteer at the shelter where Charlie was and I have to say he was the SWEETEST cat! His new home is very luck to have him. Good Luck Charlie!

I work at the shelter where Charlie was and I just wanted to thank you for all of your help. I miss Charlie but I'm so happy that he has a loving home now.