March 27, 2013--Mr. T is an extremely friendly and outgoing cat. He recently was one of a few feline ambassadors at Harbor Hope Cat Rescue's St. Patty's Day Meet and Greet. 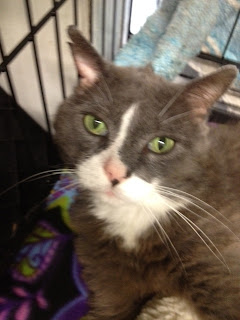 He still would love a forever home of his own.  He would need a canned food diet, no dry food.

September 6, 2012:   The following narrative is from the amazing rescue group that is lovingly caring for Mr. T.

Named because he came in with such severe ear mites that he had scratched the entire back of his head raw and bleeding. He had one strip of "Mohawk" hair!

He is probably around 7 years old, now neutered, vaccinated and microchipped. FIV and FeLV negative. So loving, gentle and sweet. Loves everyone!

His diabetes may have been brought on by depo medrol given for his ear mite irritation. He is on 1 unit Lantus insulin AM and PM and eating DM canned. We are hoping his glucose will normalize once the depo is sufficiently out of his system so he won't need insulin. The people who found him were thinking about keeping him and wanted to do minimal care at the vet, which is why bloodwork was not done prior to the depo. He is truly a gentle, affectionate guy who would make someone an awesome companion.

Gig Harbor WA. Harbor Hope Cat Rescue. Email Laura at petsavers@aol.com. Potential adopters in the area: I will be happy to supply insulin for as long as Mr. T needs it.
Posted by Jennifer at 2:55 PM