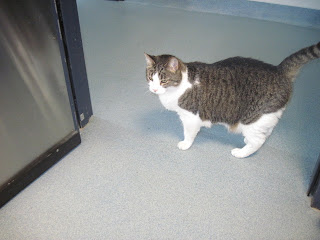 June 12, 2012:    Chunky has been adopted!! Not only has he been adopted, he's also off insulin now that his diet has been changed.

We are very thankful to Jenn F and family in CT for fostering and helping get this little man to his new home.  We've set up a chipin so hopefully we can cover some of his costs for travel and vetting. (Chip-in widget removed.)

June 1, 2012:  Chunky, an adorable 12 year old neutered little man is currently located in a municipal animal shelter in Connecticut.  He is heading to a DCIN foster home as soon as transport is set up, but he would love a home of his home.

Described as a big boy who loves to hug people, the shelter staff love his personality.  "He will wrap both his arms around your neck and squeeze."   He is very tolerant and gets along with other cats, dogs and children. 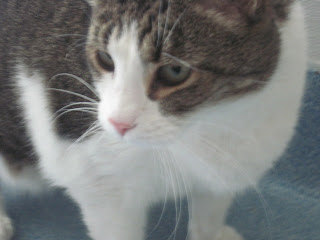 He belonged to a 94 year old woman who rescued him when the neighbor left him, she had to surrender him because she could no longer care for his diabetes.

Currently weighs 16 pounds and getting 3units of Lantus BID, eating dry food.  In foster care he will be transitioned to canned only and his dose will be changed based on his blood sugars.
Posted by Jennifer at 10:47 AM