July 14, 2013 -- Tidus broke so many hearts today when his foster Mom JennF helped him to leave this plane of existence for the vastness. Over the 13 months Tidus has been in DCIN care...from the very first day...he has been a sick boy needing extra-special care. Today, his congenital heart defect sent him into congestive heart failure. Sadly, we let Tidus go. Among the other medical conditions Tidus had were Acromegaly, Insulin AutoAntibodies, Pancreatitis, and Gastrointestinal disease. His care has been a challenge for his foster folks, JennF and Marc, but they have done nothing but love and care for him and their hearts are shattered. We offer them huge hugs for their loss, and we wish a gentle crossing to our very dear Tidus. ~Venita

November 30, 2012--DCIN still owes $2,850 on Tidus's hospitalization for pancreatitis and his cardiology consult. We are wrapping those amounts into a single chip-in that we hope to fully fund by year-end.

November 21, 2012--Tidus had a consult with a veterinary cardiologist today. He has congenital malformations of his aortic and mitral heart valves. The valves are leaking and not opening properly. There is no heart muscle damage; it is not HCM. Tidus is being put on Enalapril and baby aspirin. The cardiologist says the risk is chronic heart failure and sudden death from a blood clot. There is no "cure" and the condition "doesn't go away." The vet could offer no prognosis as this is a rare condition in cats and not "studied." When he is in heart falure, Tidus will present with not-at-all-subtle labored breathing.

DCIN will love and care for this dear as long as he will let us.

November 16, 2012--Tidus was discharged from the specialty hospital yesterday. His discharge diagnoses were Pancreatitis, primary gastrointestinal disease, diabetes, and heart murmur and cardiomegaly (enlarged heart). He has come home with a nasal-gastro feeding tube and is on Clinicare (for the feeding tube), famotidine (antacid/antinausea), and Metronidazole (antibiotic/anti-inflammatory). He is back on Lantus insulin, at 2U BID. This hospitalization cost more than $2800. Tidus's foster family is very happy to have him back home.

The abdominal US and Tidus's medical history gives the vet concern for IBD/lymphoma (thickened stomach and intestinal walls and enlarged lymph nodes). Tidus is having a fine needle aspiration (FNA) of his stomach wall today. We will get the histology back within 24-48 hours.

The vet says there is no evidence of diabetic ketoacidosis (DKA). His BG level in his blood work was back down to 282. All other bloodwork was "good."

The chest X-Ray shows no lung tumor but it does show an enlarged heart--the left atrium. Tidus also has a heart murmur. There is no evidence of heart failure but they will be careful with the fluids. Also, Tidus cannot undergo anesthesia until he has a cardio consult (thus the FNA instead of a biopsy for possible IBD/lymphoma). Because Acrocats have enlarged hearts, I asked about Acro. The IM vet is not thinking Acro. He says that Tidus has none of the physical abnormalities of an Acrocat even though he is a big cat. The ER clinic's cardio vet is not in until next Wednesday. We have an appointment for Tidus with the cardio vet next week.

For now, Tidus is getting supportive care for P'titis, will have a FNA of his stomach tissue today, and will get a cardio evaluation next week. The estimate for his care (before the cardio) is about $3K. He will be able to come home to JennF when (1) his temperature is back to normal, (2) he is feeling better, and (3) he is eating well. JennF will be visiting Tidus to encourage him to eat. If Tidus does not eat on his own, he may get an NG tube put in tomorrow. (That tube can be placed without anesthesia.)

Tidus is being a very cooperative boy. Please send him the best vibes for a quick recovery.

November 13, 2012--Tidus is in the ER. He is lethargic, was vomiting last night, and has a fever of almost 106 degrees. He is on IV fluids until the internal medicine specialists get in, at which point he will get bloodwork, an abdominal ultrasound, and a chest X-Ray. Please help us pay for this care. The $1200 we already have paid will take care of Tidus's costs for 24 hours. 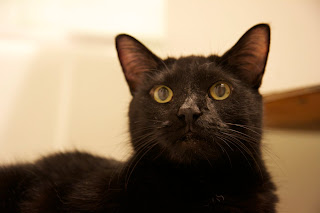