Thoma continues to be great. We moved over the summer and Thoma adjusted quite quickly. I wasn't sure how it would go for her, but she seemed fine after only a couple of days. I actually think the move helped the dynamic with our other cat Nena -- like they were both starting off on the same foot in a new space. Just this weekend we received our new bed and started sleeping in the newly renovated upstairs. Since Thoma was mostly a "downstairs" cat we didn't know if she would come up and sleep with us, but she does! We all sleep together in the same bed.

Overall, she seems happy, engaged, affectionate, likes to play with the cat dancer. She enjoys being the older wiser kitty in our household. We love her dearly and can't imagine her not being part of the family.

May 26, 2012--Thomasina's foster Mom Amy has adopted her. Congratulations Amy and Thoma, and welcome home Thomasina!! 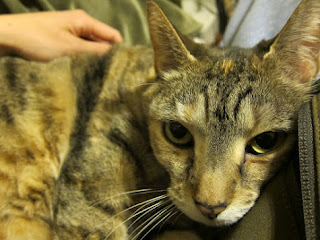 April 16, 2012~The beautiful Thomasina went into her new foster home on March 28th with Amy. So how is this little cuddle bug doing now? Her new foster mom happily reports that she has settled in nicely. Although she is keeping her distance from the resident cat Nena they are happy to sleep in the same room, on opposite sides of the room :)

She is now on a mixed diet of Fancy Feast and raw food which has helped her slim down a little. Her blood glucose is still under 4.8/88 meaning she is still not requiring any insulin. She is a very happy kitty who looks for warm laps to cuddle into and even if you tell her there is no room somewhere on your person she will wiggle her way in :)

We are so happy that Thomasina is doing so well in her new foster home. Thank you Amy for looking out for this beauty ~Céline

February 28, 2012--Thomasina is now officially Off the Juice!! An update by Marta on Diabetic Cat Health.


She is bossing my cat around (which he does not mind, he is very submissive despite this being his home), she is snuggling with me on the bed and couch (whenever she gets a chance) and keeps stealing my cat's toys and brings them to her bed. now that she is feeling well, she seems like she's a kitten again

Thomasina needs a home! Dear DCIN, I am volunteer at a high kill shelter and with the crazy weather in Philadelphia we have been getting many injured cats as well as kittens and momma cats with their babies. As much as I enjoy having Thomasina, I would love to start taking in other cats. Thoma is currently taking under .5unit a day and for the last week, she has been getting only one shot of insulin a day (down from 2 a day). She is coming around and I hope to have her food regulated - you can check her progress on DCH forum. While she was at first very unhappy with my cat, Bud was very persistent and now, as long as he doesn't bother her during feeding time, they are doing just fine.

Because of the urgency of opening Marta's foster spot for the shelter, DCIN is moving Thomasina to 911. If you can offer Thomasina a foster or furever home, please email Céline@dcin.info.

Marta also wrote this about Thoma.

Thomasina with slow introduction to cats, does just great. There will be days when thoma is sleeping on my lap while my cat is snoozing by my laptop when in doing homework and they are just fine. No idea how she is with dogs but she LOVES people and isn't shy around them. She climbs on all my friends, purrs and demands attention. She is very good about testing, loves her food and is a catnip addict. While she is not much interested in playing with me, I do frequently see her playing with toys on her own.

January 20, 2012--What is Thoma's story? On January 3, DCIN learned of Thomasina through this Facebook post. We were told little about her--she is 10YO, diabetic, and was in the Philadelphia shelter. As a special-needs cat, she was not available for adoption, only for a rescue pull, and DCIN was not an approved rescue organization to make pulls from that shelter. Thoma was a high risk of being destroyed at this open-admission shelter.

DCIN case manager Celine networked extensively and found a shelter-approved foster home to house and treat Thoma (provided DCIN supplied insulin, testing equipment, and education) and a shelter-approved rescue that would pull her and then transfer ownership to DCIN. But things changed when Thoma had a symptomatic hypo (seizures) on 1/7/12 (on Humulin N insulin). That same day DCIN had applied to be a shelter-approved rescue organization. The shelter staff told DCIN that Thoma had to be out the next day (Saturday) or she would be destroyed. Although DCIN was not yet approved (it subsequently has been), the foster Mom, Marta, pulled Thoma under her own signature and took her home. Venita visited with Marta that afternoon with insulin and supplies and explained and demonstrated insulin dosing and BG testing.

Celine quickly worked with Marta to get her established on the forum at DiabeticCatHelp.com. On DCH, Marta's advisor is helping her with Thoma's insulin dose. Thoma has been changed to Fancy Feast classic canned food and her appetite is good. She is being BG tested pre-shot, and gets occasional spot checks and curves. Thoma's preshot numbers have quickly come down from the 3 to 500s to the mid 100s. It took Thoma a couple days to settle into her new digs, but Marta says that Thoma now purrs like a motorboat.


Marta's shelter intake papers said that she had never been to a vet. DCIN, with the help of its supporters, got Thoma a full "Welcome to the Vet Visit," with exam, bloodwork, and urinalysis. The vet said she looks great. The only health issue is the diabetes, which the vet said Marta is appropriately treating. (The vet was impressed when Marta showed up with her log and was able to "talk FD.")

Bottom line is that Thoma is a healthy, happy, middle-aged insulin-dependent (but maybe not for long) diabetic cat that needs her own home and heart.

We do not know Thoma is with dogs, cats, or children. Marta has her own cat in the house, but she has not introduced Thoma to the resident cat.

Might you have a spot for this love? If so, email Celine at Celine@dcin.info. 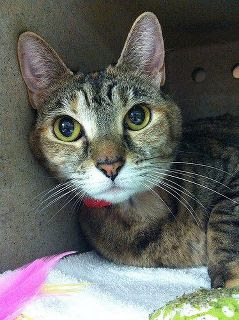 January 8, 2011--This page soon will have a writeup on Thomasina, a diabetic cat that DCIN has rescued from the Philadelphia SPCA.

Until then, if you have been following Thoma's story on Facebook and want to help DCIN get her the first vetting she ever has had in her life, please chip-in if you can. Yes, her family dropped Thoma at the shelter and reported that she had never been to the vet. That may or may not be true, as we have been told she is altered, but nevertheless, DCIN needs more information about her medical condition.

We also want to add some dollars to Thoma's account to pay the costs of her foster care that are not covered by donated supplies.