Pippin and Piglet Have a Home 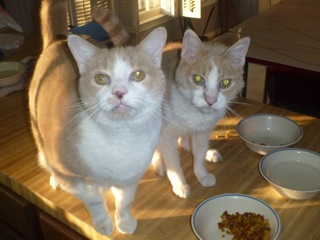 March 23, 2012--A friend of DCIN's discovered last week that Pippin and Piglet had been surrendered to a shelter. (Their DCIN case manager was not told of this change in their situation.) As of Saturday, the two were resting comfortably in a new home. Pippin is showing severe neuropathy and DCIN has sent some Methyl B12 tablets his way.

January 25, 2012: Two brothers, one diabetic is diabetic, their person died in November and neighbors have been caring for them. The home is going up for sale and no one can take these two handsome boys.

The information we received is:  The two kitties names are Piglet and Pippin. Pippen is the one diagnosed with FD. [Neighbor] has been caring for the cats since November when the person who owned them suddenly died (very tragic).... says though that they are running out of time in trying to find them a home because the house is now being put up for sale and he isn't exactly sure how long they have. He would very much like to be able to place these two boys together if at all possible as they have been together all their lives. He unfortunately cannot keep them because he already has three kitties of his own.


[Neighbor] has been trying to get Pippen to eat mostly only wet food (Friskies) but that his brother Piglet only likes hard food so its difficult to ensure Pippin doesn't eat it. Pippin is currently on 2.5 units of lantus twice a day and he has already begun to notice that Pippin is not drinking as much and that he isn't eating as raveniously. These two bothers are 9 years old and very sweet and affectionate but can be a little shy upon first meeting. They are both buff tabbies. Both kitties have been fully tested FIV/FeLV negative and are current on the vaccinations.  Full medical records can be made available. 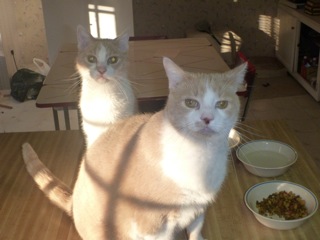 Oh My!! Don't they look just like the other fur babies at ChezTay? I wish there wasn't so much going on here....
But...ChezTay has no current vacancies. :(