Shane at Home with Martica

May 10, 2012--Another "after" picture of Shane-Sebastian. What a wonder a whole bunch of TLC can do. 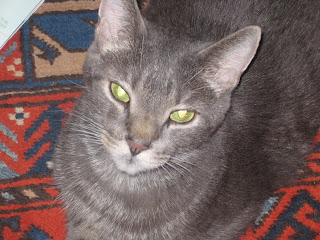 April 16, 2012--Martica sends me regular updates about Shane (renamed Sebastian), but I haven't had the time to share them.

In today's update, Martica tells me that Shane/Sebastian has gained 5 pounds (now up to 11 pounds). "I still think he could use a couple more, he's still on the thin side although no more bones showing." S/S will be getting a dental procedure this week or next week; he has a broken molar. S/S is on a mostly raw food diet for IBD. He is starting to "fit in" with the rest of Marta feline crew, although he is somewhat possessive of her.  ~Venita 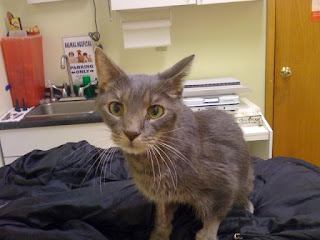 Here is Shane tonight. It was pretty impossible to get even this one picture because he was moving around so much. Meowing and wanting to walk on the floor and jump off the table! Back to normal scaredy-cat behavior. But he was purring and sweet and very strong, despite being so darn skinny. His eyes look amazing--sooooo much better. He had a little rough ridged area on his right eyelid before but that seems to be totally gone now. Don't think he's on fluids anymore, saw no signs of an IV. His fur was shinier and he just needs to put on about 7 pounds and he'll be fine! One of the vet techs told me that everytime she comes in he rubs against his cage and is so sweet and a joy for them to have there. He is bone thin, though. Gotten fatten this little guy up. The insulin should help.

Shane was in a NYCACC shelter and scheduled to be destroyed. We were told Shane was in diabetic ketoacidosis (DKA). An experienced diabetic cat caregiver, Martica, wanted to rescue him. I said that DCIN could not help with a DKA cat in the NYC system. DCIN is not "authorized" to pull from those shelters, and we haven't yet set up a system with an approved rescue to coordinate a rescue. I am not certain that I want DCIN with involved with the morass that is NYCACC. Also, DCIN's experience is that a DKA cost on average $1K/day at an ER vet.

Martica approached an "approved" rescue to pull Shane. Shane was taken to the rescue's vet, which is not an ER facility. Shane is not getting the intensive care he would get in an ER facility. But Shane is a fighter, and he is coming back.

This is Shane on his 3rd day at the vet clinic. He was still very sick, but purring and head-butting. He wasn't eating though, which caused Martica concern.


On day five, Shane is definitely improving. He gobbled up an entire can of Nature's Variety Instinct Duck that Martica brought him. He also ate ate about half a can of BG Quail and Turkey.

Shane was very curious about all the noises from people walking around and doors opening and closing.Shane was a little skittish--but back to normal cat behavior--in previous days he was more zoned out to the surrounding noises (although still alert).


Shane's eyes look MUCH better. He is "content, purring...FUR MUCH SHINIER. Still way too skinny, but smooth, softer, healthier furr and very mobile." Shane groomed after eating! He licked his face, his tail, and the side of his body a little bit.

About day five, Martica wrote me, in part:


"He was purring during my whole visit--a little more active, walking around the vet table and reacting to all the surrounding sounds a lot--got scared when people walked by. He looked much much better fur-wise and his eyes were not so sunken in. He did not have the IV in...they did not fully explain but something went wrong with it and they said they have to do it again. Not sure how long ago that was. The vet tech told me he gobbled up some...DM? food earlier. He also meowed when I first came in.

Dr Vet said I might be able to take him home before Xmas, but he wasn't sure, he seemed to think it's possible or him to go downhill again. Anyway, so we are seeing how this week goes. He took blood work this morning. Also, I don't think he's blind, not sure how ACC got that. He was just in DKA and stumbling because that's what happens---those vets should know that!"

DCIN will be sending Martica diabetic supplies to care for Shane when he comes home to her. DCIN also has set up a chip-in to help pay for Shane's vet care. If you can help, click on the widget below.

he looks SO much better, and Martica, you rock!!!!

Thank you all sooooo much for your contributions and for your emotional support! I visited Shane tonight and he looks better than ever. Really needs to fatten up, but hopefully the insulin will put some fat on his skinny bones. But he was in great form--eyes looked great, very energetic, meowing and moving a lot. Apparently eating well, etc. I sent Venita a new picture so perhaps she can post it. I don't know his exact bloods but the vet said they are much better. He gets to come home on Monday. So this boy gets a 10th life!

Wonderful pictures and great news! Thank you, Martica, for all you went through to save this cat, and to DCIN for sharing the story with us and helping.

Martica thank you for the updates and for being Shane's guardian angel! Bess you for saving this boy and for giving him a new lease on life. Merry Christmas!

Shane looks great!! Thanks Martica for the update. I have been thinking of him and I am so glad you were able to save him! Just goes to show you how resiliant cats are and how they want to live but need a caring soul to help.

I stumbled on Shane's story. Don't have a Facebook account to find any updates.
If Shane is now in YOUR care, is there a way to donate to you?
Keeping all paws crossed that you and Shane are doing well...

Hi Lola. I am sorry for the lack of updates. Shane came home to Martica on, maybe, December 27. Shane was rescued through another rescue, not DCIN. However, DCIN has not yet been asked to pay its part of Shane's critical care and the chip-in is open through tomorrow. If you want to donate through the chip-in, the money will go onto Shane's account.