January 14, 2014--A vet visit for intestinal distress symptoms showed that Scooter had a large abdominal or intestinal mass that the vet said was cancer. His Moms decided to let him go. The announcement of his passing is on DCIN's Facebook page here. Fly free, dear Angel. ~Venita

November 21, 2014--See a brief story of Scooter's journey to his new home on this blog page.

September 7, 2013--Scooter arrived home with his new moms today. The transport went as planned except that he spent two extra days in Detroit because the Newark airport was closed to incoming flights on Labor Day.

August 18, 2013--Scooter will be going to a permanent foster home in central Maine under the sponsorship of another rescue. We are so pleased for Mr. Scooter. We are certain he will be very loved and very happy in his new home.

Getting Scooter from remote British Columbia to central Maine has taken a large amount of planning. Scooter's transport will start on August 23 and end on September 5. He will ride in style through the mountain of British Columbia to an overnight foster and fly to Toronto the next day. DCIN is forever grateful to Pilots N Paws Canada PETSCORTS for finding someone to fly Scooter in cabin from Vancouver BC to Toronto ON. Scooter will foster with DCIN case manager Eva for the week before she drives him across the Canada-US border at Sarnia/Port Huron and he stays a couple more days with DCIN transport manager Phoebe. On Labor Day, Scooter will board a United Cargo flight (one stop) to Portland OR, where he will stay in state-required 48-hour quarantine with HART of Maine. His permanent rescue will pick him up at the end of his quarantine period and drive him home.

DCIN has paid to prep Scooter for transport, including getting his rabies and FVRCP vaccines. DCIN has more to pay for his two flights and three vet visits for travel health certificates. Once he gets home, DCIN also wants to help get Scooter the dental he has been needing for more than a year (extractions included).

Please help DCIN get Scooter to his new home and get his mouth cleaned up.

April 14, 2013--Scooter's mom has found full time employment and her schedule is making it even more difficult to take care of Scooter. This means she no longer has to move but she still cannot keep Scooter. She would like to see him in a new home by June. Please continue to share. Look at how handsome Scooter is. Such a beauty ~Céline 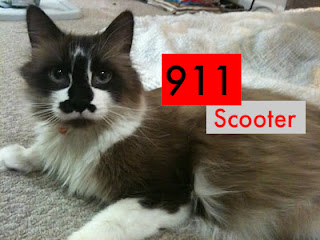 February 19, 2013--Scooter's Mom tells DCIN she soon will have to move to a place in Canada from which it will be even more difficult to transport Scooter to a new home. We have changed his status to 911, hoping to get him adopted before the move date (which is unsettled). 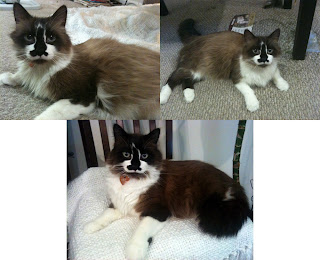 He is very mellow and quiet and affectionate with adult strangers.  He will even keep your feet warm while you sleep.

He gets along fairly well with other cats but is afraid of loud children.  Scooter is use to being hometested and is currently on .5 units of Lantus twice a day.

Scooter was adopted from an ad when Rylee was looking for a companion animal.  She had to way of knowing that Scooter had been diabetic for some time.  Due to high levels of stress in the home Scooter needs to find a new home to live in.

Do you have room for Scooter in your home?  If you do please email celine@dcin.info.

May 27, 2012-- Scooter is doing well and feeling great. His mom sent us this photo, the top two are before he started insulin and the bottom is him today. She says "he is loving life, lounging in the sun on the windowsill and running around playing like a kitten again." 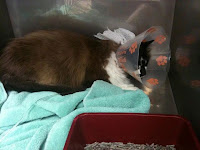 [Chip-in is now defunct and we have removed the widget.] 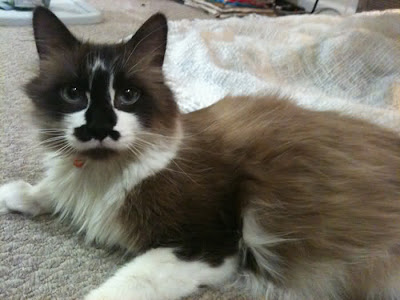 His new mom was looking to adopt a kitty to keep her company in her new apartment. She wanted to adopt an older kitty and found Scooter in a local classified ad.

Within a few days of getting him into his new home she noticed something was not right with Scooter. He drank huge amounts of water and used the litter box a lot!

Rylee did not know what the future held for Scooter not having any experience with feline diabetes but she was a good furmomma and started researching it. She found FDMB and asked for help. DCIN found her as well and hope that we can help keep Scooter with his new momma.

A vet visit confirmed that Scooter is indeed FD and he began his insulin on December 27th. DCIN will continue to help out Scooter and Rylee so this beauty can feel better.

Welcome to the DCIN family Scooter and Rylee.
Posted by KittyPaws at 2:12 PM