Frankie is in his new Home!!


January 26, 2011 ~ Remember sweet Frankie? Well he is doing amazing in his new home. Since he has started ProZinc his new mama is seeing amazing healing numbers through his blood glucose tests. Frankie is fitting right in. He still gets a few glares and hisses from his new brother and sister but I am sure it will not be long before they are all in one big cuddle pile.

Alyssa had this to say yesterday:

Right after I set my phone down, he reached up w/both paws and grabbed my wrist, then started licking my hand. Then he started alternating between gently biting andlicking, but he wouldn't let go w/his paws! I guess I must taste good. :) He's currently snuggled right near me on the couch, having a cat-nap. 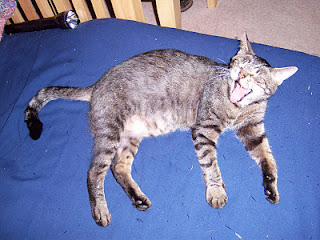 January 9, 2012--Frankie is flying to an awesome home in Kentucky this week. Please help us get him there through this chip-in.

December 7, 2011--Frankie is a handsome 5 year old, neutered brown tiger/tabby male who is in desperate need of a new home. He is not currently being treated for his diabetes. He was rescued off the street by his current owner.

Frankie has had a difficult time on the streets before he was taken into a loving home. He does have on eye that was scratched from fighting on the street that has healed over but it causes him some discomfort. He is currently being treated with Refresh Liquigel daily to help keep him happy.

Frankie's rescuer is a very compassionate woman who has found herself in a very difficult situation. She said this about Frankie:

"I don't want to surrender him.. I LOVE HIM & really want to keep him as part of my family. But I am in a VERY difficult financial position due to job loss, and am facing the possibility of not being able to keep a roof over my head, and so need to keep his best interest at heart & find him a good, loving, responsible, lifetime home, preferably nearby (Grand Rapids, MI), where he will be loved & cared for, and treated like the amazingly wonderful little being he is."

Can you please open your heart and your home to this gorgeous little man. He has already been through so much in his 5 short years and it is extremely heartbreaking for his current owner to give him up because she loves him so much but she is trying to put a plan into place. Please help if you can.
Posted by KittyPaws at 2:02 PM