Hasn't had a shot in over a week. However, still getting some spot checks just to make sure all is well.

Her hair has grown about an inch and boy, is she going to be a beauty when it all comes in. I just love her cute little white paws. She likes to lay on the back of the sofa and lean against me while I watch tv or eat. Of course that makes her closer to the fork with food on it that she thinks she deserves to have a taste of. LOL.

Glad to have added her to the household.

September 20, 2011: Update on this sweet young lady. New mom says the following: "Miss Sammy is doing well. She's friendly, beautiful black/grey with the white bib and feet (picture makes her look golden colored, but she isn't), easy to test and get her shot, and loves to have her head scratched. She gets along with the other cats which is a big plus for anything coming in to my household. She does have some trouble jumping up on counters and bed but she walks just fine. I did notice her back left leg shaking/quivering. Will have to get an x-ray to see if it's arthritis. Her bg this morning was 184 and she gets .5 units lantus. She likes Friskies over Fancy Feast...can you believe?

This past weekend we had a severe storm with hail. I have a metal awning over the bedroom window. I'm sure the hail and rain sounded terrible and scary to Sammy. I found her behind the toilet. Guess someone told her this is the place to be safe during storms now that she's living in "tornado alley". LOL."
We are very happy for you Sammy, enjoy your amazing new home and new furry brothers and sisters.
September 11, 2011: Sammy is on her way to her forever home today. She went to the vet yesterday and got everything she needs for her travel today. Congratulations on finding your perfect home sweet girl.
September 8, 2011: Sammy is going home!!! She is flying on Saturday. If you can donate towards her flight and the purchase of her carrier, we would really appreciate that.

September 6, 2011: The cytology report does not show cancer, it's more likely a fatty tumor or a Lipoma. The vet feels that without removing the mass and biopsying it's not a 100% guarantee, but at this point she does not feel this is anything bad and to simply watch the mass over the years unless at some point when Sammy is regulated they want to remove the mass.

Thank you all who contributed to her procedure, we are working on plans now to get her to her new home and will keep you all posted.

8/31/11 - Sammy needs surgery to biopsy a possible mammary gland tumor. She had an adopter, when the vet records came through we saw the note regarding the mass "firm mass palpated near right caudal mammary gland-midline" Without funds to biopsy we don't know if she has cancer, if she does not have cancer she goes to her amazing new forever home. If she does, a decision will need to be made. 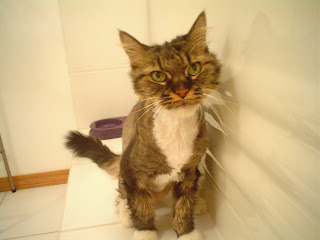 August 18, 2011--Sammy is currently confined to a large bathroom in a basement due to severe allergies of the foster mom's son. This cat belonged to her over seven years ago, since then Sammy remained with her ex, she moved on, had children and did not have pets with her new family. When her ex showed up with Sammy very sick and told her to put her down, she couldn't do it, she loved the cat too much.

Immediate vet attention and it was found Sammy is diabetic. Since she has not had any pets with her kids, she did not know of her son's extreme allergies. She is a single mom, doing the best she can to save this cat that was basically tossed on her.

Please no remarks about allergies and kids, this isn't a situation where after years of having the cat, she wants to give her up, she is trying to save this cat's life. DCIN will help her with insulin and supplies for the time being, but Sammy needs a home of her own. Any donations towards her care would be greatly appreciated by DCIN and is tax deductible. 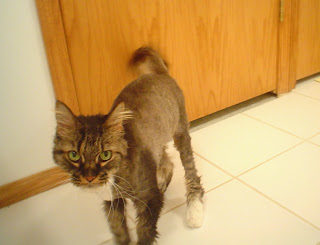 "Sammy is an older cat, yes, but she has proven very adaptable in the past to new environments. While she was with my ex he moved several times and Sammy always adapted quickly without acting out, spraying, urinating outside the box, or other typical "trauma" behaviors.

Sammy is a sweet and extremely affectionate cat. She would make an excellent companion pet for anyone able to afford the special care she needs, especially an older adult. Though she is also very good with kids and other animals. "

I'm so happy to hear that Sammy found a family who can take good care of her!