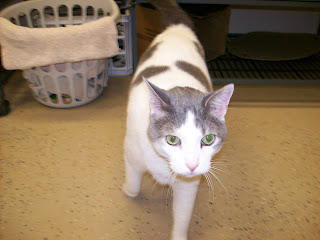 September 30, 2011--Mokey's new Mom called me today. Mokey's insulin dosage has been being managed by his vet, who has been weaning Mokey off insulin as his blood glucose numbers have gone down. As of three days ago, the vet had Mom completely stop the insulin (from 1U). The vet will re-test Mokey in a week or two. Mokey is completely on wet food, has lost about 2 of the 17 lbs. he came with, and is feeling pretty sprightly. Congratulations Mokey and Mom!!!

Mokey does continue to have a problem with inappropriate urination. Most is this is because he stands up to urinate and sprays over the top of the box. I referred Mokey's Mom to Dr. Pierson's litter box page.

August 25, 2011--Sweet Mokey was brought to the shelter, why? Because he was peeing on the floor; he had undiagnosed feline diabetes. The shelter found his diabetes and planned to destroy him. Sadly this type of thing happens all the time, but this story has a happy ending.

Posted on our Facebook page by Amy and Melanie: "can you share this link to Diabetic Cats In Need (DCIN) I am in an airport right now and limited to my phone for internet. Tell them that I am close enough to the cat to help the potential adopter (my FDMB name is Melanie ....), but am travelling right now. Maybe with DCIN involved they will at least put off pts. "

DCIN called and learned that a shelter volunteer wanted to adopt Mokey, but expenses are a concern so we are looking for a sponsor or two for Mokey's care.

DCIN has purchased his insulin and will help his new mom get started.

To his new mom, we thank you for stepping up and opening your heart and home to Mokey. To the others who are always so caring and concerned for the kitties who need you as a voice, thank you.

If you can donate one time for Mokey, please see the instructions on this page of Ennis's Fundraising blog. Let us know it's for Mokey, through the PayPal form or by email. Any amount will be a help.

If you want to sponsor Mokey with an amount that will be taken out of your PayPal account monthly, fill in this form and press on the "Sponsor Mokey" smilie. Until Mokey is Off The Juice (in remission), paying his diabetic costs is DCIN's long-term commitment to his rescue. (Because it appears that Mokey will officially be OTJ soon, DCIN is no longer seeking sponsors for him.)
Posted by Jennifer at 8:43 PM