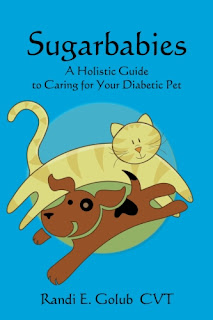 “I wish there was a beginner’s guide to feline diabetes.”

Most involved in some way with an extra-sweet cat will answer “Yes.”

There is such a book, self-published earlier this year by Randi Golub, a certified veterinary technician in Oregon.

And it is good! It addresses the basics of treating feline diabetes in a concise and organized fashion. Think of it as Feline Diabetes 101: the summer session.

Some people who haunt interactive Feline Diabetes sites on the Internet, analyzing the nuances of Buddy's blood glucose readings and Fluffy's feeding patterns, might call this book elementary. And some might disagree with this book’s lack of a regimented treatment protocol, its failure to proselytize hometesting of blood glucose levels, and its continual recommendations to seek veterinary advice and guidance.

But that is this book’s beauty. The vast majority of diabetic cat caregivers rely heavily on veterinarians and do not test blood glucose levels at home. For various reasons, most caregivers never think of being more involved in treating their cats’ diabetes. But for caregivers who might be inclined to be more proactive, this book helps show them that such an approach is possible and guides them to resources.

The standardized spreadsheet (here and here) that is used on the FelineDiabetes.com message board (FDMB) is an excellent tool for tracking daily blood glucose levels as well as curves. It is not a copyrighted form, and perhaps Ms. Golub could refer to it in a future edition of her book.

Sugarbabies, which is a paperback, currently sells on Amazon.com for $10.93, with the Kindle version selling for $7.99. Sugarbabies would be an inexpensive and useful gift for a person brand new to caring for a diabetic cat.

I believe that hometesting blood glucose levels saves lives, not only by keeping diabetic cats safe from overdose, but also by getting them well regulated and often into remission. Caregivers are far less likely to surrender diabetic cats that are regulated or in remission for rehoming or destruction. Hometesting blood glucose levels is a requirement of Diabetic Cats in Need’s financial assistance program.