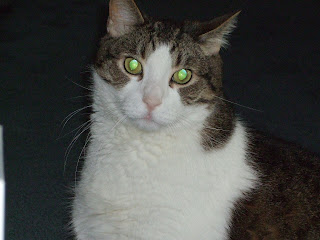 
Thank you for getting back to me. However, I have just recently found Benny a good home here in the Philadelphia area, which seems to be working out well. Thanks again!

June 28, 2011--The woman Benny owned died about a month ago. She was his very favorite person, although he also loves his Mom's daughter. And she loves Benny, but she isn't able to take him back to her college dorm when she returns next term.

Benny is an 11YO, neutered male, DHS--white and black/gray/brown tabby. He is declawed and an indoor cat. He weighs 16 pounds, and is tall and dense.

Benny's Mom's daughter thinks he will adapt to a new owner as long as that person is willing to give him some attention (he loves one-on-one attention). Benny usually sleeps on the back of the couch and loves to be brushed and petted. He is generally very friendly but gets a little anxious at the vet. Benny currently lives with 4 other cats and gets along well with them. He is okay with children. He has never been around dogs.

Benny was diagnosed diabetic one year ago after his family noticed his excessive thirst and hunger. He has no history of diabetic ketoacidosis (DKA) or hypoglycemia (low blood sugar)? We have been told that his blood glucose levels are under control with 2.5 units of PZI (Protamine Zinc Insulin, U40) twice per day. He is not being hometested.

The vet has told the daughter that Benny's BG levels were initially very high (400 or 500) and then it has been kept under control with 2 then later 2.5 units of insulin. When the daughter took Benny to the vet a couple weeks ago, his sugar was in the 100s.

Every day, Benny eats one can of Purina ProPlan Kitten Chicken/Liver Food (split into morning and afternoon feedings) along with a small amount of Hill's Prescription M/D dry.

Benny has no other health problems. He had a couple teeth removed four years ago because they got infected. He has no behavior problems such as spraying or inappropriate urination. Benny needs his annual vaccinations in August, and has not been tested for FIV/FeLV since he was a kitten (when he was negative).

The daughter says that Benny is not at risk of euthanasia. "I will find him somewhere to go and he will NOT go to a shelter!"


I really love Benny and it is really hard for me to have to give him away. He was my mother's favorite cat and I also love him dearly. He is truly a wonderful pet.