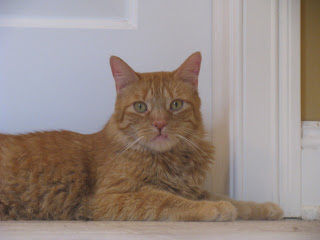 Within minutes of Carolynn and her girls getting the cat home, he got a bath and a new name--Tiko. Carolynn, an experienced feline diabetic caregiver, gave insulin over the weekend and prepared Tiko for his previously scheduled dental on Monday. With his dental, Tiko had ELEVEN teeth extracted and came home on pain meds and antibiotics. On Wednesday, Tiko was inappetant and lethargic, and having difficulty breathing. Carolynn took him to the rescuing vet, and he has not been home since. For the breathing difficulty (over 80 respirations/minute), Tiko received a dexamethazone (steroid) shot. Tiko seemed better the next morning, but by afternoon was vomiting and was given Cerenia and IV fluids for that. On Friday, May 6, Tiko was not vomiting, was breathing OK, and his mouth looked good...but he was inappetant and depressed and had a mildly uncomfortable abdomen. IV fluids were continued. In the afternoon, his urine test showed significant ketones, a dangerous metabolic condition. The vet continued fluids and gave Tiko medication for nausea and to stimulate eating. On Saturday, Tiko looked worse. Carolynn and her vet, with DCIN's agreement, transferred him to the Farmington Valley ER Vet. When admitted, Tiko was not yet DKA, but he was acidotic, severely constipated and dehydrated, and having pain. He was treated for those symptoms, and the treating ER vet said the steroid shot, lack of adequate pain meds, and constipation caused stress which led Tiko into acidosis. Over the weekend, his potassium level fell and he became DKA and at serious risk for his life. 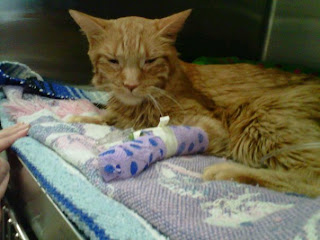 On Monday morning, with Tiko eating a bit and his phosphorus levels improving, Carolynn transferred him back to the rescuing vet. However, that afternoon, still showing metabolic signs of DKA, Tiko also was diagnosed with hemolytic anemia. His treatment included blood transfusions. His condition was dire.

But Tiko, his vet, and all those praying for him started to turn him around. By the evening of Tuesday, May 10, Tiko's hematocrit was on the rise and he was eating. The Toll on the Human Heart. A message from one of the hundreds of people following his journey on DCIN's Facebook page.

All my strength and love are his. It's so heartbreaking to see all that they go through and all that they give and get so very little in return. I hope and pray that he fights through... he has not had the love and home he was owed. I am trying to understand why so much innocence is lost in this world. Please hold on little Tiko please come back to us and let us try to give you the life you were meant to have....but if you can't and it is just too much I will try to understand and even though I have never met you Tiko I will carry you in my heart.

The Toll on Pocketbooks. The rescuing vet has given all her care without charge, including his dental procedure. DCIN charged $2,500 on its credit card for the ER care. Carolynn paid the remaining $780. The ER vet's office manager refused a rescue discount, which is normally 20%. DCIN isn't one of the "regulars." $2,500 is 13% of DCIN's annual budget. Ballpark, DCIN only spends $300 to $400 for each diabetic cat it helps each year. Over the Mother's Day weekend, DCIN's two managers (not a big rescue here) researched and applied to organizations for help with DCIN's costs. We were turned down by IMOM.org, FVEAP.org, and 1800PetMeds.com. A couple other organization did not respond. We are pursuing funding with the PETCO Foundation and the Onyx and Breezy Foundation. This page was written for those two organizations. Should those organizations wish to see more detail about Tiko, a detailed blog page is here, and DCIN's Facebook page during that period includes dozens of posts about Tiko. We have been fundraising for Tiko from individuals. Presently, we have raised $1,083.12 from about 100 donors. We also have a pledge of $350 from one of our regular contributors. We have been asking for crossposts to our Facebook page from other feline pages, such as Sparkle the Designer Cat (2195 followers). In the past week, we increased "fans" to our Facebook page by about 35% with that effort. One of DCIN's individual sponsors offered an interest-free loan for the difference between what DCIN has committed to and what it collects for Tiko. Because of this, DCIN will not have to pay exorbitant credit card interest rates. However, for this loan, DCIN has pledged 25% of its unrestricted donations, which will limit our ability to help other diabetic cats until the loan is satisfied. Most of the 2 to 3 diabetic cats DCIN takes into its financial assistance program each month are at risk of surrender to a shelter or a vet, or rehoming, because the owner is under- or un-employed (including in the military), disabled, elderly on a fixed income, or in some other way being slammed by the cost to care for his/her diabetic cat. We thank you, PETCO and Onyx and Breezy Foundations, for considering our appeal to not only help us help Tiko, but also to keep afloat our ability to help other diabetic cats.
Posted by Venita at 11:00 AM

I'm really surprised that a vet gave a diabetic cat a steroid shot...it really must have been a significant shortness of breath to warrant a STEROID shot. My Armand became diabetic from a steroid shot and from now on will avoid it like the plague unless its life or death.