Peake in MD--Looking for a Home 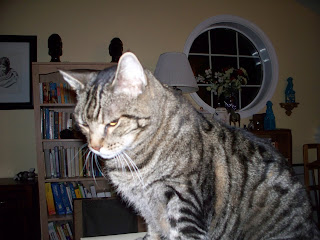 My mother recently passed away, leaving behind a 13 year old, neutered male cat that is diabetic. I've got him with me, but I am allergic to cats, so this is probably not a forever home for him. I suffer from asthma and other respiratory illnesses, and so it may become impossible to keep him at some point.

He was diagnosed with diabetes about a year ago, but my Mom was too frail to really do anything about it. He's fine, seems healthy, but recent tests show he is still diabetic. The vet seems to think he can be treated into remission at some point, and we're going to work on that for now. 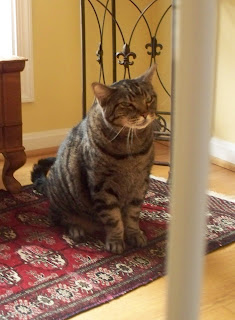 He's an indoor-only cat, weighs 16.5 lbs now and is a gentle giant. His name is Peake, and he is a handsome gray tabby with a gorgeous, thick coat. He is very talkative, loves to interact with people, pets and touches your face and arms, plays a lot and loves attention.

It would be great if you could help him find a home. I have been working with local rescue folks in Maryland, and we're hopeful, but it's hard to adopt out a senior cat with diabetes, of course.

Here's some pictures of him--he is quite a character.