Nikki -- and emails with my sister...

I asked Lenore, my Hospice grief counselor, to come in and be with us. I know she has never forgiven herself for not being with her cat, Darius, when he left for The Bridge. We told Nik to look for Darius. Said, He's a handsome tuxedo, so is already appropriately attired for a place on your dance card.

Lenore asked me if I sang. Said, Well, pretty much only James Brown or Janis. Probably not appropriate right now. So she hummed a little song for Nikki. Then she said to keep talking to her because she really responds to your voice. And touch. So, I did... My hands never left her, Donna...

I told Lenore that Nik is probably the only cat thoughtful enough to think of bringing a Hospice grief counselor along to see her off on her next journey.

Dr. N. was so gentle with us all. Explained everything. Saw Dr. A. He gave me one of those kind of holding hugs while I shook and cried and said, I can't fix her this time. He gently said, No, you can't, Deb. We have such a huge history, he and I. Met him in 1986 with Sasha and Miguel. Then, there were the tumultuous 18 years with Giz... And, the last four years and very slight change with precious Nikki...

Dr. N. explained what was in the kitty cocktail she was giving Nikki before the final fluids because Lenore asked. I asked if we could have one too because we were both kind of basket cases by then. That's when Lenore told me she'd never done this before. Been with people, just not kidimals. Dr. N. smiled and said, No. But, she was generous with Kleenex...

Lenore took me to dinner at a diner. We both had omelets. She thanked me. Said it was cathartic for her being with us tonight. Said she finally made peace with Darius for not being with him. I smiled at her and said, Leave it to Nikki to pay it forward... She smiled back and said I'm a good Mom. Said I need to take as good care of me as I did of Nikki. Said I was very brave. I thanked her.

I have to go to bed now, but want to leave you with this, dearest Donna: http://www.youtube.com/watch?v=2v5d3WHVQFY

I can't speak. I can't write. I love you. And God bless, Lenore.

I love you, too. Very much.


Fly free, my precious Nikki-Pedia... Wear your russet wings proudly! It has been an absolute privilege and honor knowing and loving you, my furry quirky girl. Thank you for gracing my heart...

Look for your Grandma. She really loves you. Look for Darius. Look for all the furry friends you've made here who have gone ahead and are waiting to greet you. Whisper in my dreams, my little tiny dancer. Giz will tell you how...

If you don't want to subscribe but want to send a one-time donation, DCIN accepts PayPal donations at ennis93 @att.net (remove space). Use the "Personal" tab and the radio button for "gift" to avoid fees on cash and checking donations. If you use a credit card, you can choose to pay the fee to maximize your donation to the fund. In the note section of the PayPal page, let me know that your donation is for Nikki. 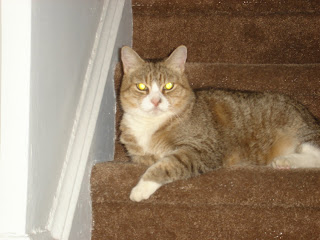 So I can't tell you exactly when Nikki came onto my radar, except that it was a few years ago. She was in rescue with Fancy Cats Rescue in Herndon, VA. We were told that she’d been in foster care for eight months and had developed cage brain, meaning she’d walk in circles the size of her cage when she was let out a few times daily.

A friend of mine offered to adopt Nikki, and I was part of the transport that took Nikki to her new home. It was in the Spring, Easter Eve, 2008.

Nikki has been Anonymous Cat (AC) #1 since she was adopted because....well, because there was a need for Deb to remain anonymous. It's complicated. But Deb has decided to "out" herself and Nikki as being AC#1. Since Deb415 took Nikki into her home and heart, DCIN and I have been helping to provide insulin and other diabetic supplies, food, and vetting for Nikki.

Those who know Deb know what is going on and why Nikki is in need. For those who don't know Deb and Nikki, trust me....there is a need. 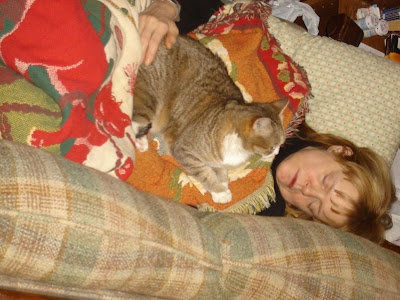 I helped others drive Nikki to Deb one bright Spring morning. Deb was concerned that Nikki would be walking in circles for weeks. I bet her that Nikki would be down the stairs within 24 hours. I won that bet, although there was no money involved. (Or if there was, I never got paid.) I slept upstairs in Deb's bed that night, and when I came downstairs in the morning, I found Nikki sleeping on Deb's chest on the couch. 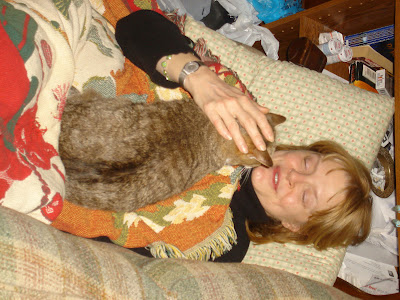 DCIN has provided significant support for Deb's Nikki. DCIN has never fundraised for Nikki. But the time has come that DCIN wants to ask those who love Deb as much as I do to help support Deb's care of Nikki, the round, russet tabby with big green eyes and very short legs.

DCIN is starting a PayPal subscription program for Deb and Nikki. Certain choices and the button to subscribe are above. By subscribing, you are signing up to periodically send money for Deb415 and Nikki. DCIN will use those donations to feed Nikki, and to keep her in insulin and testing supplies.
Posted by Venita at 3:26 AM