Marius has a Home


The person who watched him for me while I was on my trip, her boyfriend fell in love with him and kept him, so he has a new home and is doing well. :) 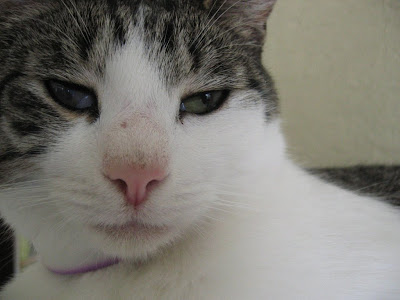 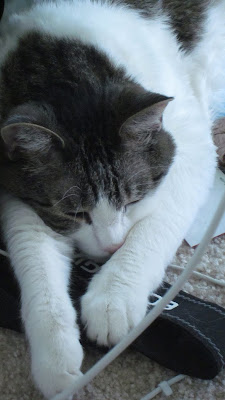 April 21, 2011--Marius is an 8 year old, neutered male diagnosed diabetic about 5 weeks ago. He lives in the Baltimore/Washington DC area. He is shorthair, white with patches of grey/black tabby on his back, tail, and head. He weighs 15 lbs. and has a normal build. He is currently eating Friskies Special Diet wet food. "He's not picky, he'll eat anything pretty much. He has a normal appetite."

Marius is an indoor cat. "He's never been outside, he just thinks that he wants to be outside."


Marius loves everyone. He's purposely scratched one person, once, and the guy deserved it. He gets along well with other cats, he in fact prefers to have other cats around. (He doesn't love them, but he's lived with two and rarely fought with either.) He's never had a problem with children (that I've seen, he hasn't been around many). He's extremely tolerant of pretty much, well, anything (with the exception of oral medication; He *HATES* it). He has no issues with the vet, he just tries to rub them and love on them. He would sleep in my lap all the time if I'd let him, so yes, he's a lapcat. He sleeps in lots of places, he's not really picky. His biggest flaw is that he's probably the most stubborn cat on earth. This, however, is balanced by his extremely friendly personality.


Marius is pretty attached to me. I'm not sure, however, if that's just because I'm here all the time and he loves people in general or if it's me specifically. I've had him since he was a kitten though.

Marius was diagnosed diabetic by the vet. His Mom took him to the vet because he was polydipsea and losing weight (5 lbs). She says he has no current clinical symptoms because he is controlled on insulin (didn't say the type) 2x day 1.5U. He is not hometested.


This is going to sound strange, but he's too lovey. The vet and the vet tech combined couldn't do an ear stick because he kept swiveling his head everywhere in an attempt to head head rub and be petted.

History of blood glucose readings? "The vet would know the exact numbers, but the first one was around 450. Second (after switching to low-carb food only, and not insulin) was around 320. The most recent one was 90."

Other health issues? "He had a very mild upper respiratory infection at the start of the diabetes, it's gone now. I think it was a side effect of his immune system dealing with the issue. He also has a cloudy right eye, which the vet said not to worry about. He has had it since he was a kitten, and he has no problem seeing and no problems with depth perception."

Any behavior problems? "He will pee on other things if the catbox isn't clean or if it smells like catbox...but, I think that's fairly standard cat behavior. He has never sprayed (I got him from the shelter fixed)."


When he was a kitten, and both [FIV and FeLV were] negative (this is required by law, I believe, in all florida animal shelters). He got a rabies shot when I had him diagnosed a few weeks ago, he hasn't had other shots in about two years. They're fairly easy to get though, I just never bothered because he's an indoor cat.

Vet records are available and a potential adopter can speak to the vet.

Why is/has the cat been surrendered for euthanasia or adoption? "Not Euthanasia, but I am trying to re-home him because I travel too much to be able to guarantee my ability to give him his injections. He can't be a road kitty because 1, he'd hate it (he is not fond of the car) and 2, I often go to peoples' homes, and so I'd have no place for him at the other end. Especially once school starts in the fall, I won't have two set times where I can be here for him."

Anything else you think a potential adopter might want to know? "He's a fan of scratching up couches. I've been unable to break him of this habit (most stubborn cat in the world...). He has, however, been trained to stay off the counters. What he does when I'm not around, I couldn't say, but when I'm here he'll jump down if I tell him to. He likes a lot of attention, and would be great in a multiple person or multiple cat home. If you're just one person with no other animals for him to play with or get affection from, he may be somewhat demanding."


Since the last time I talked to you, a friend moved up here from Florida. Lucky for me, she offered to watch him while I am on my long trip. If I haven't been able to find a new place for him before I leave, she will be the contact while I am gone. Right now, the plan is to leave around 5/13 and return around the same time in July.

Shortly after Marius was diagnosed I realized I wouldn't be able to take care of him properly and it's a really tough decision to make (especially for me, there was/is so much going on and so many things changing for me right now that this was kind of the straw that broke the camel's back sort of thing.), and finding your service made the decisions concerning his care a lot easier.

Marius's Mom first posted about him on the FDMB here.
Posted by Venita at 3:40 PM