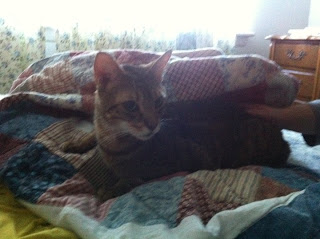 We found out about Porch2 (formerly Tiger) when the district manager of a branch of the CT Humane Society contacted DCIN on 10/1/10.

We currently have a diabetic cat who we are hoping to find a diabetic cat rescue for. He's 6 years old, neutered male, declawed in the front, friendly with children and other cats, tolerant of dogs, indoor only.

On 10/6/10, Jennifer mentioned Tiger to Shelley, the woman who had recently adopted Bill, and Shelley offered to foster Tiger for DCIN. I won't drag you through all the nonsense that the CHS dragged us through, but suffice it to say that the shelter bends no rules and "no-kill" doesn't mean the CHS won't euthanize an otherwise-healthy diabetic cat. We truly thought we had lost Tiger, but on 10/13/10, I heard from the placement coordinator that DCIN would be allowed to rescue Tiger. Shelley was at the shelter within an hour. Soon after Shelley agreed to foster the cat, she became pretty invested in him and decided to rename him Porch2, after her father's cat. She has been fortunate to get him very close to OTJ (off the juice, that is, no longer on insulin and diet controlled) with a diet change to low-carb wet food and a brief course of insulin. DCIN plans to have Shelley take Porch2 to her vet to determine whether he needs a dental procedure, as soon as we have money to do so. Porch2's dental is budgeted in the Fall 2010 fundraiser.
Posted by Venita at 5:25 AM